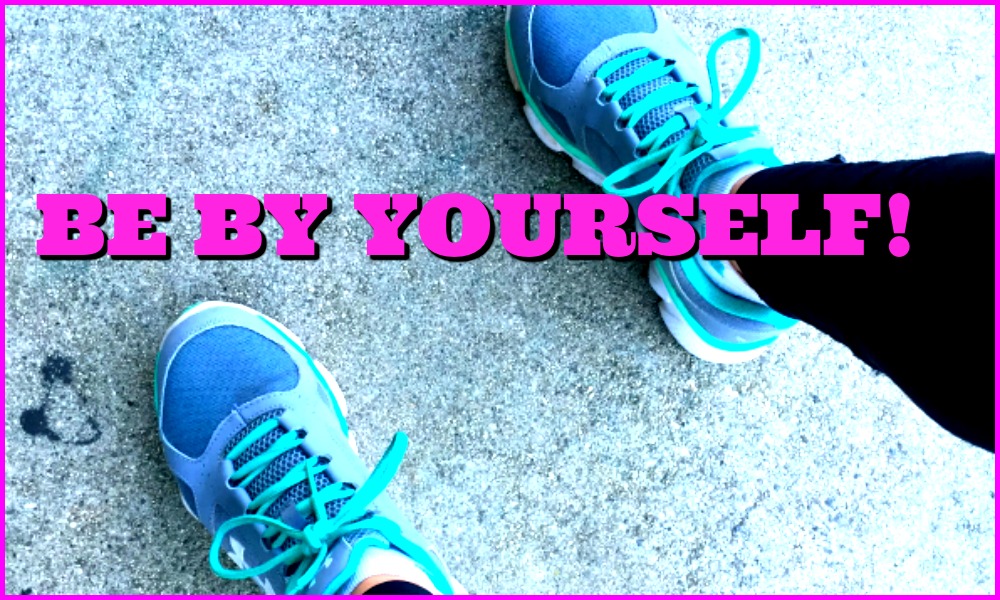 Running is all about you! No one else can make you do it. No one else controls how you feel. Sure, a dog can start chasing you and you’ll take off running, but that doesn’t count. This week in my Diary of a Running Chick my advice is simple, embrace being by yourself!

I know I’ve mentioned it before, but for a very long time I only ran outside with other people. I refused to run by myself. Whether it was for track, field hockey, or with my man, I was not okay running by myself. This was a major mental hurdle for me, but once I started running by myself, I began to thrive within myself and my running abilities took off!

The first thing you need to prepare yourself for when adventuring outside for a run is that you’re all by yourself. It’s just you. You are the keeper of your run. No one is going to look at you if you stop running. No one is running next to you. There are no television screens right in front of you, nothing to distract you from how you feel. You can listen to music, but it’s really just you and nature and the path forward.

ALSO ON BUZZCHOMP: Release the Power of Positivity!

When I used to run inside, I wasn’t ever truly by myself. Think about it, what happens when you go to the gym in the morning and run on the treadmill? You encounter a lot of the same people, either at the gym or on the way. What happens when you see the same person every morning? At some point one of you breaks the ice and you end up chatting. Once you talk to one person, you end up talking to other people. Soon you’ve formed a community and although I love being social, I’m not into being social at the gym. I like to focus on my workout, but ultimately that personal time is no longer so personal.

When you run outside you don’t interact with anyone else, unless you pass a familiar face and wave hello. You are actually by yourself and if you run early in the morning, you’ll hardly ever come in contact with anyone at all. This is amazing! Not only is it mentally freeing, its a mental challenge. Once you’re able to embrace being by yourself while running, you’ll open yourself up to so many other benefits!

One of my favorite benefits from running solo is being able to allow those mental benefits to take hold. Especially when you’re first starting out, it’s so gratifying to go and complete a run. The funny thing is, that feeling has never gone away for me. Every morning that I run, I’m able to start my day with an accomplishment. It energizes me for the day. It’s mentally freeing. Nothing else matters when you’re out running. I also feel like I can do anything when I’m out on my run. I love taking that feeling with me throughout the rest of my day, and it all starts with loving that ‘me’ time.

Time seems to completely disappear when I’m out running. When I first started running outside, thirty minutes felt so long. For whatever reason, that was my cap when it came to running outside. But before I knew it, thirty minutes would just fly by and I found myself extending my runs, embracing longer and longer routes. I craved them! I wanted to be out running for more time. So I indulged and gave myself more time alone, more time to run. I’m amazed that now when I try a completely new route, I always manage to make sure my time outside goes up. I love that!

Running really lets you embrace being by yourself. It teaches you to love it and that’s a major step towards personal happiness. The more you run alone, the more comfortable you are being alone. I always find myself craving this and I don’t feel complete without it! Go run!

Next Post: Diary of a Running Chick – Learning to Run 3 Miles!