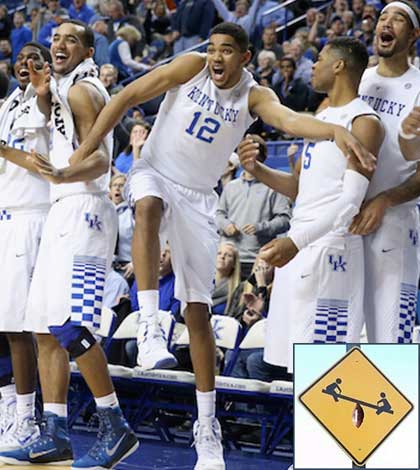 Far and away the NCAA March Madness favorite, can the Kentucky Wildcats stay undefeated and win the title? Its prediction time. Can they do it again next season? With EVERYONE picking them to win, what’s the smartest bracket decision? Decisions, decisions.

As you cliff-hanged on Monday, inquiring about Kentucky not only finishing this year without a loss, but duplicating the UConn women’s team and going back-to-back, the answer is obviously and emphatically no. Men’s college basketball doesn’t work like that, specifically at UK.

Women’s basketball, even in the year 2015, is incredibly top-heavy and incredibly UConn-dominant. After all, earlier this month, the Huskies defeated then-undefeated and No. 1 South Carolina by 25 points. It’s Geno’s crew, and then it’s everybody else.

Not only is men’s basketball so much more competitive at this juncture, you know what Kentucky’s team is going to look like next year? Yeah, neither does John Calipari! He doesn’t know how many of his dozen-some-odd McDonald’s All-American underclassmen are going to leave early for the NBA. He doesn’t even totally know what he’s getting from his incoming recruiting class. Freshmen can be so fickle.

So the idea of the Wildcats even making back-to-back Final Fours is far-fetched, especially since they still have to get to this one.

But I like their chances in 2015. They obviously have the best team, unanimous No. 1 in the country. It also helps that UK has the most talented roster, one capable of completely dominating foes on the defensive end while also pouring in buckets on O.

I don’t agree that Duke has a chance to beat Kentucky. Duke stinks something awful on defense. For all Jahlil Okafor does well on the block on offense, he isn’t exactly Roy Hibbert in there on the other end. And teams seem to get whatever they want on the outside against the Blue Devils. No, the team that could take down Kentucky is an athletic and defensive club who can hang and take advantage if the Wildcats have an off-night shooting, which is known to happen.

A now-floundering North Carolina team gave UK all it could handle earlier in the season and might’ve won if the Cats didn’t shoot so well from three. A game like that, but where Kentucky isn’t hitting shots, is a plausible way to take the favorites down.

I wasn’t implying that Kentucky could take things back to back. I was merely remembering the last time we had an undefeated team that won the championship, the lady UConn Huskies. That team happened to do it two years in a row. Kentucky will not pull that off; agreed.

Although I do believe Kentucky will enter the NCAA tournament undefeated, I’m not nearly as confident in them making the Final Four, let alone winning the title. Make no mistake, they will be my champion in my March Madness Bracket picks. But is my confidence high that they can pull it off? No.

As you noted, men’s college basketball is infinitely more competitive, less top-heavy, and more prone to ‘underdogs’ making surprise runs to defeat top teams in the tournament. The teams are just more evenly matched all around, especially once you narrow things down to a field of 64 (or however many are technically in now and days).

The likelihood of Kentucky winning every single game this season is small. But on a game by game basis, the likelihood of them winning is very high. Hence my waffling. They are by far the best team in the country. But once the pressure is bigger than we have ever seen, once its lose and go home, can they keep it together?

My prediction is that they do. They go undefeated and win the NCAA championship. Whenever a men’s college basketball team appears so far and way better than the field, they tend to make the Final Four and win the title. It will be very difficult to pick against Kentucky once the brackets are finalized.

This brings up an interesting conundrum. Do you pick Kentucky to win your bracket, the landslide favorite to win every game they are in? Or do you NOT pick them because they are such a heavy favorite and everyone else will be picking them to win? Ah, the problems of a sports gambler. Decisions, decisions.