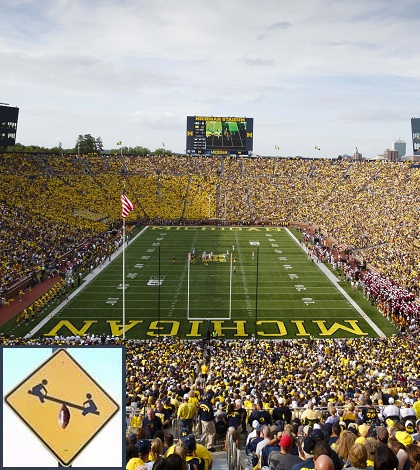 College Football week 2 proved that often a loss is better than a bad win. The top 25 kept it interesting, and week two’s only marquee game lived up to the hype. Were playoff hopes dashed? Survey says yes.

Although the slate of games on tap for week two of the college football season seemed less than stellar before it began, things turned out incredibly interesting. There were few upsets, but the threat of upsets lingered the entire weekend for top-10 teams. To me, that may be enough to squash some of these teams’ playoff hopes.

No. 7 Auburn needed overtime to defeat the Jacksonville State Gamecocks. I never even knew there was another school in the country with the Gamecocks moniker (South Carolina being the other) until this game took place. That’s how little Jax State has ever been on the radar.

Auburn did win and they always say the W is the most important part. There are no points for winning pretty…although I’m not sure I agree. At the end of the year, if it comes down to, say, an undefeated Auburn team and another comparable squad with a “good” loss, I’d almost move Auburn aside. This 27-20 win over Jacksonville State seems worse, doesn’t it? A win is a win except when it’s not.

The same goes for No. 9 Notre Dame, although the Fighting Irish played a much better opponent. ND also lost its quarterback for the season, so this may be a moot point, but a one-score victory over a less-than-mediocre Virginia team is not something to be proud of on an end-of-year resume.

The final score was a bit more comfortable, but No. 10 Georgia struggled mightily with Vanderbilt too this weekend.

These couple of games strike me as what Florida State did a season ago. The Seminoles squeaked out bad wins and still made it into the playoff because of their overall record. But it ended up looking like they didn’t deserve to be there. I wonder if the committee this year will take a closer look at bad wins and mark them down a peg. Not all wins are created equal.

I’m firmly in the middle when it comes to this logic, but with college football it’s certainly important and often accurate. However, comparing these disappointing victories of week two with last year’s Florida State team is unfair. FSU went undefeated and had one of the best quarterbacks in the nation. Those two factors are what got them into the playoffs and helped dismissed crappy victories. It’s too early to make comparisons for teams like Auburn and Notre Damn who are not coming off a national title and about to run the table.

What is fair, and an appropriate debate, is comparing these crappy victories with an excellent loss. Not all defeats are created equal, and number 7 Oregon lost by a measly three points to number 5 Michigan State. Is the loss by the Ducks better than victories by Auburn or Notre Damn? I say yes.

Auburn proved it’s not on the same level as other top schools who completely decimated their competition in week two. Same goes for Notre Damn and Georgia, who struggled in victory. The Seminoles won by twenty points. Clemson won by 31 points. Georgia Tech won by 55 points. TCU won by 63 points. Ohio State shut out its opponent 38 to nothing, Ole Miss won by 48 points, Alabama won by 27 points, and Baylor cruised to a 35 point victory. USC did as well, winning by fifty points.

The flip side was the only game of the week featuring two top ten schools, each with serious playoff hopes and potential. Oregon versus Michigan State proved two things. MSU is certainly for real, so all doubters can now shut up. It also proved that a loss by Oregon was nearly a win.

The Ducks will need to run the table in order to make the playoffs, but could probably survive one more loss like this, if other schools also fall along the way. The record isn’t as pretty for Oregon after week two, but their loss to MSU trumps those awful victories, keeping their playoff hopes more alive than most.