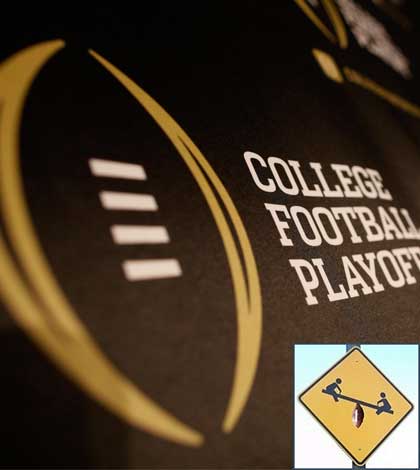 The College Football Playoffs are the perfect way to end the season, but have rendered the Rankings meaningless. Do preseason ranks mean anything? Are they even a factor in the sport’s final four?

You brought up two interesting points in Monday’s column. The first was that being a top team in a division opposite those ‘divisions of death’ is the ideal scenario. It’s hard to argue with this logic. These teams (Georgia in the SEC East or Oregon in the Pac-12 North for example) have a stupendous shot at making their conference championship. From there, one victory likely seals up a spot in the four-team playoff. I agree that seems to be a better position than actually being a member of those deathly divisions or even being a team outside of the top conferences entirely.

The second point you mentioned, which struck a chord with me, was the impact of the preseason poll. In regards to being ranked near the top in the first poll of the year, you said, “it usually takes a loss by one of those top four teams in order for another school to steal their spot.” I agree that used to be the case, but is it still true with the newly instituted playoff system?

The preseason rankings used to be beyond stupid. No sport changed more in one offseason than college football. By rule, anyone who’d been playing for four years had to leave; that chops up a roster right off the bat. Better players also leave early for the NFL, new freshmen flood in and there is general turnover all over the rest of a team. The changes are huge, and that’s not even considering teams who are establishing a new quarterback or perhaps hired a new head coach and staff.

It’s inarguable how little we really know about specific schools in July and August. That brings the legitimacy of the preseason polls into question, yet they were always the basis for judging teams through the season. As you said, if a team started high, they must be good and thus shouldn’t fall unless they lose. But what if other teams are better?!

I’m hoping this new playoff lessens the value of the polls. The playoff committee doesn’t participate in its first vote until very late in the year, which is good. It also, supposedly, takes its own stock of the teams regardless of what the rankings may indicate. Doesn’t that mean the preseason polls especially will become obsolete, as they should. Playoff berths should be based on full resumes, not misinformed rankings.

I’m happy we agree on something, but to call the Preseason College Football Rankings misinformed throws crap in the face of every analyst who broke down players and coaching staffs in order to evaluate the teams heading into the season. You know how much game tape we have on every single player, including those coming out of highschool? Way too much.

That being said, I do believe the new playoff system will slowly erode the ultimate weight of the Preseason Rankings. Because the playoff committee does not vote until so late in the season, they have a large sample size to utilize. The rankings in August will be a mere afterthought by then.

The rankings in general should not factor into their decision in the first place, but these are human beings, and assigning numbers to things is hard to ignore. But I felt last season worked out very well, with strength of schedule playing a huge role in the committee’s decision. I see no reason why the new system won’t get better.

The old BCS system was so powerful because of the rankings. College Football became defined by them. Fans loved them. The media fed mercilessly off of them. Now that they have little to no bearing on the College Football Playoffs, the only role they truly serve is fan enjoyment and team placement into lesser known Bowl games. Both of those are important, but not for the reasons you’d like.

Bowl games are critical to college football, but the Championship game is the pinnacle. Separating the two is not necessary, but its frustrating for fans to enjoy the rankings when they are inconsequential to the championship. This is why I say they still matter. Until the playoffs expand, or more time has passed, the rankings are the only thing we as College Football fans have to brag about. My team is ranked higher than your team. Let’s argue! The sport needs this, and everyone knows it.