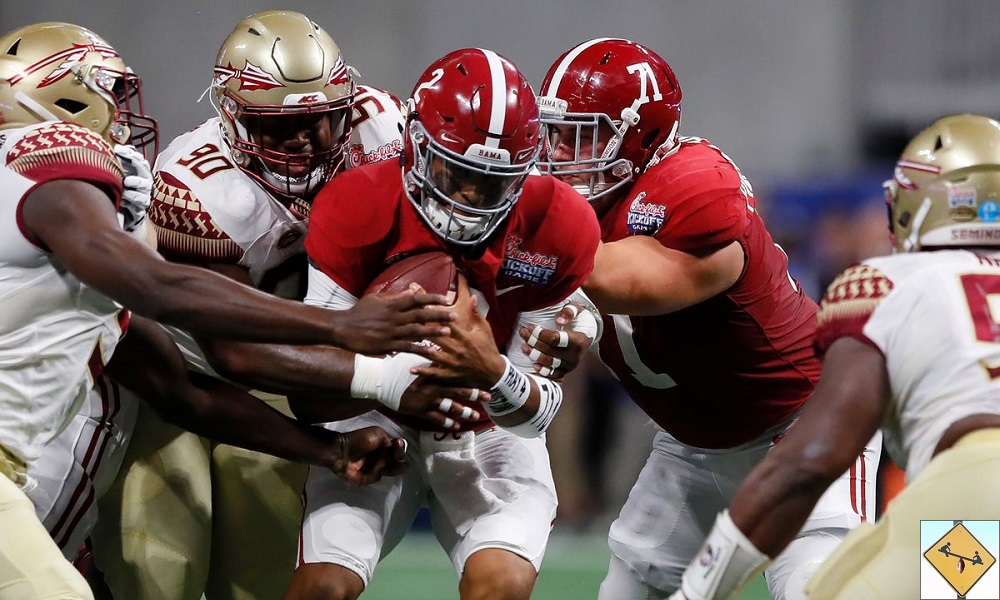 We finally get great College Football matchups in September, like Alabama versus Florida State, and fans are questioning the logic. Is an easy win better than a top-tier loss? Is this a welcome trend?

Before we get to the outcome, what do you think of this scheduling strategy in CFB? Obviously this game was literally scheduled a while ago, before we knew these two teams would be atop the national rankings heading into the 2017 season. However, the idea that teams play cupcakes all through the first month of the year is over.

Teams no longer wait for conference play to get their real year started. Instead, conference play is almost a come-down from some of the insane matchups that take place in September. This coming Saturday, we have three more matchups between top-15 teams, including a game between Ohio State and Oklahoma. This stuff didn’t used to happen!

So is it smart? With the College Football Playoff committee being human beings, they surely appreciate quality wins and can (presumably) know what losses are explicable. However, at the end of the year, someone with two losses is still essentially out of the running. That means, the losers of these early season Greatest Openers of All Time have to run the table to be in it for the playoff.

Florida State was the loser against Alabama. The Seminoles also happened to lose their starting quarterback for the year due to injury. If we’re being honest, their season is over. They would need to run the table with a backup quarterback to have any chance of making the final four. The game against the Crimson Tide was important and special. It also screwed FSU.

So who is better off? Clemson won 56-3 against Kent State. It is now the overwhelming favorite to win the ACC simply because it played Kent State while FSU played an actual foe. It doesn’t feel like these early season gambles are worth it; not when banking a win is the available alternative.

Since we agree that the Preseason College Football rankings are a load of baloney, these early season power matchups are only as such because of baloney rankings. Therefore I see no reason so find fault in them. Quite the contrary. We should be celebrating great football in September, even if the actual game does not live up to the hype.

Using the Alabama vs Florida State contest as our example, we must first set aside the fact that FSU lost its quarterback for the season due to injury. It is unfortunate, but could have happened no matter their opponent. If Florida State still had its quarterback, then it would still be a top five team this season. Early season loses are more forgivable. A loss to the best team in college football is considered a good loss, and a loss to Alabama is an expectation for nearly everyone. Even a two loss FSU team, with one of those losses being to the Crimson Tide, is a playoff contender. Being confident enough to take this game in week one speaks volumes to your football team, assuming you win a lot afterwards.

Most seasons a team must run the table, or finish with only a single loss, in order to make the College Football playoff. Therefore, playing a tough game to kick things off only helps your cause. Losses in September mean less than losses in October and November. They just do. Clemson is better off this season, because they did not lose their quarterback. But defeating Kent State means nothing. At least FSU has a game worth discussing on its resume thus far. Banking wins is a coward’s approach to winning. Everyone plays a full season of games. Many teams even have conference championship games. If Florida State defeats Clemson, you’ll be singing a different tune.