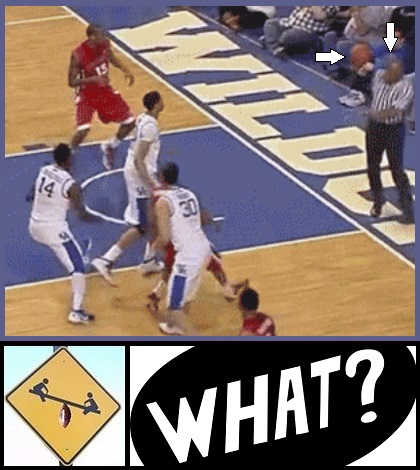 NCAA College Basketball is back baby! In celebration we dedicate “What ha… happened?” to the once great sport of college basketball. Funny, ridiculous, and a whole lot more.

To celebrate the return of NCAA College Basketball I present to you the following:

Description: College basketball is back, back in a hard way. Ricochet happens and unfortunately for the referee, he got caught in the cross fire.

Was this a targeted assault on the official’s dignity?
Was the tumbling striped whistle-blower able to return to action?
Why are none of the male cheerleaders reaching to catch him as he falls?

This is a New Yorker cartoon come to life. It attempts to represent the grief and pain college basketball is causing. The poor, old referee would be labeled “fans” or “nation;” something of that sort. The player in red is the “NCAA” itself. He is the facilitator and eventual bystander to this nonsense and heartbreak inflicted upon us fans.

The Kentucky players in this live-action cartoon are… well, they can stay Kentucky players because no one is more at fault for the current landscape of the sport than a place like Kentucky. They flaunt the false idea of amateurism and student-athlete in our faces on a yearly basis with each new passing recruitment class. The cartoon is a little spot on, having them actually take out the national fan base, but New Yorker cartoons aren’t always over everyone’s head.

Either that or this guy just got hit with a ricochet.