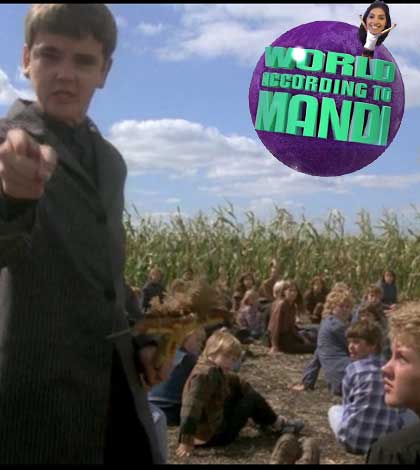 I can’t help but take advantage of watching as many horror films as possible this time of year, but my most recent choice has been banished to the realm of Horror Film Nostalgia. Children of the Corn is no longer very good, it did not hold up and will forever be labeled as nostalgia only.

Growing up Children of the Corn was one of many horror films that scared the pee pee out of me. It freaked me out! Why did the corn move? Why were the children so scary? And why did they all follow the one boy who acted like a 40 year old preacher? It creeped me out, so much so that I thought to myself, I never want to watch that movie again! BUT then I saw it on Netflix, too many years after its release, and indulged in another visit. I returned to Children of the Corn.

Upon re-watching Children of the Corn I realized one very important fact, I did not actually remember much of the film. I remember being frightened of Isaac and whatever that thing is under the cornfield. I remember being creeped out by the children. But that was it, and it was better off that way.

The story goes like this: a child preacher named Isaac comes to a small Nebraska town, Gatlin, and convinces all the children to murder the adults. Isaac worships a god called “He who walks beyond the rows.” All the children follow him except two, Joby and his sister Sarah who can see the future. Three years pass and the movie picks up. Isaac and his main follower Malachi run Gatlin when a young couple, Vicky and Burt, get in an accident and stumble into town. Seems scary, right? Vicky and Burt meet Joby and Sarah who lead them to Isaac. Malachi captures Vicky, double crosses Isaac, and a battle ensues. Isaac gets possessed and the corn goes nutty. Burt then burns down the cornfield. The End. No one ran screaming, no one fought demons, no one wore creepy masks; the movie is pure nostalgia, not a horror film worth watching.

My childhood memories are no more. I vividly remembered Children of the Corn being scary and the wicked children being WAY creepier. I remembered Isaac possessed and not as an actual child, and completely forgot that Linda Hamilton was a lead in the film. Those memories are now gone, as I banish this movie to horror film nostalgia. I wanted to be completely scared; I wanted to relive how frightened I was as a child. But nothing held up. Inevitably I realized that in 1984, when it was released, this movie was probably scary. Yet Children of the Corn is no longer a scary movie.

Maybe I’m desensitized from all the other crazy, gruesome, horror films I’ve seen. Maybe I was confusing some of the sequels with the original. Regardless, Children of the Corn did not live up to my memories. It’s still creepy weird and classic Stephen King, but don’t be fooled, it’s for nostalgic purposes only.