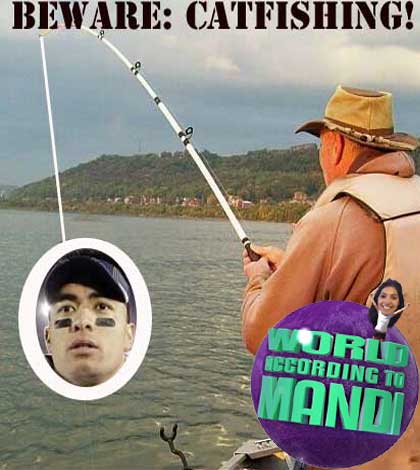 Even if you don’t follow football, let alone college football, you know Manti Te’o from Notre Dame.  His catfishing story is everywhere! That’s right; I said “catfish.”  What the heck is catfishing, you ask? Catfishing is a term for the act of engaging someone into a fake relationship, tricking them and humiliating them.  Fake relationships are nothing new and neither is “catfishing,” but seriously, there are so many things wrong with that last statement.

The Manti Te’o story is incredibly sad if he really was catfished. It’s definitely embarrassing!  If he originated the hoax and catfished the media, then it’s just pathetic. But this type of scenario is nothing new. Even before the internet people were fooling other people with fake relationships, or creating fake relationships to boost themselves up.  Time for a time warp! Remember in the movie Clueless when the lead character Cher, a ditsy blond high school student, wants to make it seem like she has a secret admirer in front of her crush Christian.  She sends herself flowers, chocolate and even love notes.  Hold up here! Cher was catfishing Christian to make him jealous. Crazy!

It used to be that writing secret admirer notes was the popular thing to do. I would know. Elementary school days were filled with love notes passed under desks and behind backs.  There were times my friends would receive a note and then keep getting them and never learn who they were from. Did they really even have an admirer… holy cow! They were catfished, even back then.

Now it’s the early days of the Internet where I found it fun to go into chat rooms, sometimes “singles looking for singles” or “troubled relationship” rooms.  I was in high school with a new avenue to cause mischief. I found it fun to pretend I was someone else and spark up a conversation with an unknowing participant on the other end.  Chat rooms were awesome! Harmless fun on my end, but hey I just catfished a person.

Now AIM, AOL Instant Messenger, is popular, a short lived moment in retrospect. I loved to chit chat up a storm and recall receiving instant messages from an unknown user who knew my name, where I went to high school, and how old I was? They must have known who I was and had to be the person they claimed to be, right? Probably should not have shared those things about that friend we both knew so well. Hot damn, I got catfished!

Catfishing is nothing new. The real question is why we do it?  Is it a weapon to get back at someone that wronged us?  If we don’t know the person does it make us feel better to control power in the relationship?  The one thing I do know is that it’s gotten way easier to catfish as the internet has grown.  We as people have done this for years, we show it in movies and television shows and it’s always a way for us to gain something from having a fake relationship.  I’m sorry, but enough with needing a relationship and enough with catfishing.  It’s an old dog’s dirty trick, like stealing from a blind person.  Damn, catfishing is crazy!