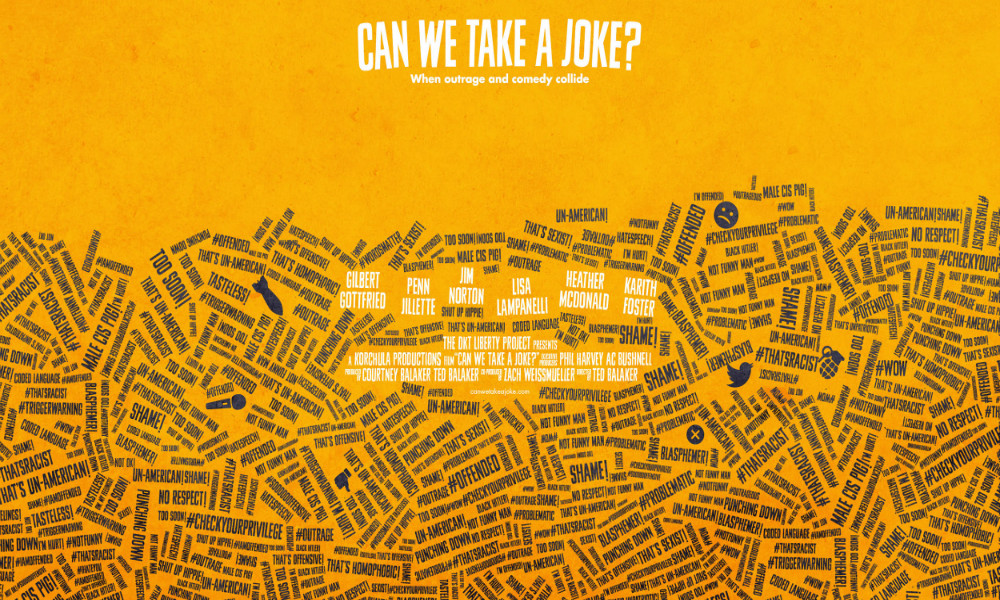 Political correctness dominates our culture. Every thought uttered in life or on social media is picked apart and dissected, searching for offense. It’s not right and makes things nearly impossible for today’s comedians. Can We Take A Joke? is a documentary that looks at this issue facing society.
(Photo Credit: canwetakeajoke.com)

There is a new movie coming out this summer (being released in select theaters July 29th) called Can We Take A Joke? It’s a documentary examining stand-up comedians and comedy, relating to free speech and being offended. Can the masses take a joke? The standard answer is, for the most part, resoundingly “No.” People get offended at the lamest and dumbest things. The trailer for this film even points out how there are large groups of people who get offended for others. Which, if that isn’t the stupidest thing in human history, is at least in the top 10.

But besides overly sensitive or purposely argumentative people getting offended at jokes, the film looks to address the idea of taking a joke and how important that is in the culture of the world. Comedy is important, and pushing boundaries or crossing lines is part of that importance.

There are a couple of clips in the trailer showing people attacking comics on stage, physically assaulting them for something they said. There are references to comics receiving death threats for their work. When the premise is already set that something is a comedy show, how can anyone take such offense that they feel violence is necessary to solve the situation? It still isn’t right, but I can understand someone getting filled with rage at hate speech that puts down a person or group of people, but raging against comedy? When you know the person talking is saying so out of sarcasm, irony or humor? It is so illogical.

Gilbert Gottfried concluded the trailer with the perfect encapsulation of offensive humor designed to entertain, not to offend. He said, “free speech is extremely important because, ah, me being a Jew, I don’t want to have to pay for speech.” It’s a silly joke banking on a Jewish stereotype, yet it is just a joke used to prove a broader point. Can we take a joke? No, not as a collective, but maybe this movie will help to explain some of the reasons why we should.