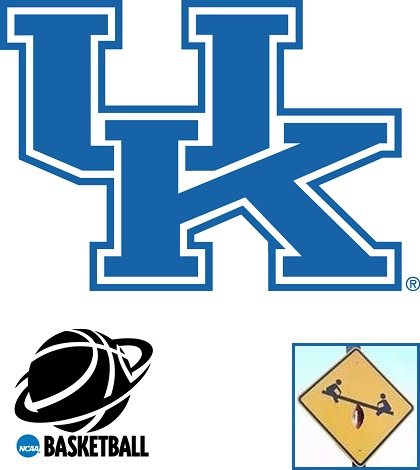 Can the Kentucky Wildcats win it all with a ten man rotation? The NCAA tournament is theirs for the taking, but with ten future NBA players, who starts and who sits? If anyone can pull this off, it’s this Kentucky Wildcats team.

But the interesting discussion that is developing with Kentucky is the discussion of depth. Is UK too deep? Is it possible to have too many good players?

This seems ludicrous on the surface. In all other sports, depth is cherished. However, in basketball, the top players are capable of playing an entire game. Thus, depth is usually reserved for teams without a solid starting five. Rotating in too many subs and finagling with too many rotations leaves players uncertain and weary of their roles and their skills.

Depth has worked well for Kentucky thus far, don’t get me wrong. In that Kansas game, coach Calipari played 10 different players between 17 and 20 minutes apiece. He has a literal A-squad and B-squad rotation going at the moment. It’s been like that for all three games this season.

It helps that all 10 guys will probably be playing in the NBA someday. But is it actually good for his team’s chances to win the title this season? I say no. Relying on 10 guys, to me, means Calipari doesn’t have five guys he can rely on. With it only being November, this might also be something coach Cal is working through, ironing out his real substitution pattern for next semester.

Or I’m just talking in circles because if this roster has 10 future-NBA players, why sit any of them?

If the five players on your bench are good enough to represent the starting five of practically every other college basketball team in the country, then that is definitely a great problem to have. Kentucky basketball is the envy of the entire nation. Oh boo hoo, your team is so good you can’t decide who to play.

For another team, with a different coach, relying on ten players would be a problem. But you answered your own question when it comes to Kentucky this season. Coach Calipari somehow convinced ten future NBA players, all NBA caliber at the very least, to come play for him at Kentucky. And all of those players knew full well that they were joining a team with other guys just as good as them at their position.

You know what great people and great athletes do when presented with a challenge? They rise up and crush it. If these kids are as good as advertised, then they absolutely love what has happened to their basketball team. They revel in the opportunity to beat out another player on their team who is as good as them. It’s probably the first time in their life that this has happened, but if they have any hope of succeeding in the NBA, then learning to come off the bench and/or winning a starting spot in the NCAA will only make it easier down the road.

The real question is, can this Kentucky team win the title with a ten man rotation? I agree that they will not, but I’m not sure they can’t. Fresh legs and endurance are so important to basketball, especially in the NCAA Tournament when each game can sap all your energy. Having an A-squad and an B-squad, or more like A and A minus, only helps keep all the players fresh. It’s up to Calipari to find the rotational sweet spot so that no one loses their edge during a game.

Only three games have been played and ultimately coach Calipari will settle on a starting five that he relies on for 2/3 of the game. Rather than a 50/50 split, it will be more 60/40 or 70/30 as the season progresses. Momentum is important and keeping his primary players in rhythm is necessary.

I feel like everyone has predetermined that Kentucky will win the NCAA Tournament. Vegas odds must be awful for them right now. But the real test will be convincing half his squad to return next season. Then the five men on the bench can be the new starting five and a modern-day dynasty might be born.