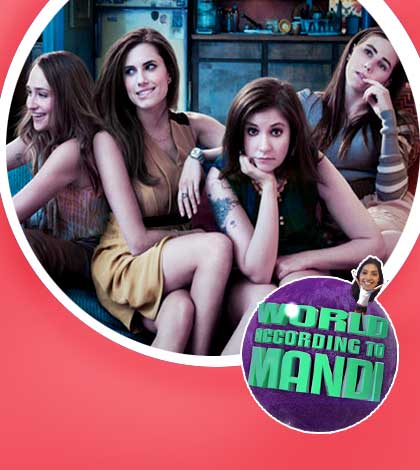 I’ve been anxiously awaiting the second season of the HBO show Girls.  That’s right, I’m a fan! At first it took some coercion from a friend to get me to watch, I thought the show was just four whiny girls.  It is, but once I started I was hooked!

Girls is an awkward show.  There’s nudity and it’s not always good nudity.  Can we say jellyrolls?  The characters speak their mind and at times it’s cringe worthy. I love that! Life is like that! We’re not all eloquent.  Also, it touches on a major flaw in society.  The middle class flaw! These girls are all newly graduated from college, trying to make it in New York City.  They were obviously all solely supported by their families prior to graduating college and now have no preparation to support themselves.  The lead character, Hannah, is flabbergasted when her parents cut her off.  Lady, it’s definitely time to get a job! Sure, it’s a bit more overdramatic, but what these characters go through is real and they are super interesting because of it!

Let me break it down for you:

Hannah (Lena Dunham) is our lead and the creator of the show.  She is spoiled, self centered, financially dependent on her parents, and a writer, so in turn she does not want to settle for doing anything other than writing. Respectable, but not realistic girl! You got to work your way up to that.  Inevitably, she has to take a job at a coffee shop. Hannah’s love life finds her obsessed with a guy, Adam, who only wants to have sex.  Poor Adam, that’s not going to stop Hannah from completely weaseling her way into making you her boyfriend. And we see a lot of her naked and not so fit, chunky, body.  Rock on girl if you’re comfortable with that!

Marnie (Allison Williams) is Hannah’s best friend and roomie.  She’s beautiful, smart, and has a boyfriend, Charlie, that dotes on her. She’s also the only one with an actual career. You all know a girl like this.  And of course Marnie wants to give good old Charlie the boot, but she can’t muster up the courage.  It’s no big deal; Hannah just blurts it out for her! They break up, he flees the city, finds a new girl, and of course Marnie is completely jealous and wants him back. Don’t worry about her though.  I’m sure she’ll have some freeing sexual experiences this season that will open her right up!

Jessa (Jemima Kirke) is the token free spirit, who doesn’t need a job (where does her money come from?), breaks up marriages, sleeps with anyone and anything, and frolics around the world! We all have a friend out there who just marches to the beat of his or her own drum.  Jessa is that girl! She thrives on doing whatever she feels like and not reeling from the consequences.  She meets a random guy and decides to up and marry him.  Well if that isn’t a good life decision then I really don’t know what is.  Party girl turned married woman!

Shoshanna (Zoisa Mamet) is the innocent, sweet, overly trusting, and naïve girl.  She’s Jessa’s cousin who lets her crash at her tiny one room apartment.  Shoshanna is a virgin and desperately wants to rid herself of that.  She loves Sex and the City.  Of course she does! She’s also the only voice of reason and has sage advice for everyone. At the end of the first season she finally loses her virginity to Ray, Hannah’s boss and Charlie’s best friend.  Hot Damn girl! You’re on fire! I’m sure some crazy adventures will occur now that she’s reached the land of sexual activity.