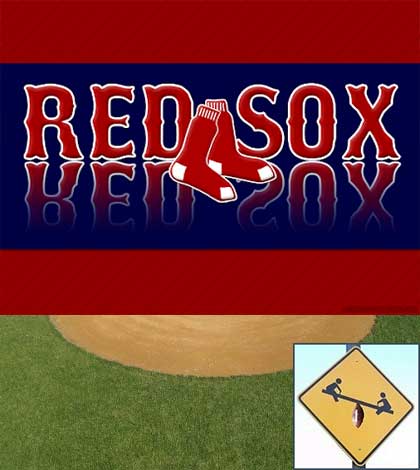 I know Red Sox fans are smiling wide this holiday because of the bats they just added, but I have to be honest. As a Yankees fan, I’m pretty pleased about the moves as well.

You mean to tell me the Yankees did NOT sign an aging, creaky, injury-prone defensive liability for $90 million? Someone else did? And it was the Sox?? Don’t get me wrong, I love Hanley Ramirez at the plate. However, there are too many games where he is not at the plate because he’s injured, and there are too many games (read: all of the games that he’s ever played) where he was forced to also play the field even though he sucks (career -4.0 dWAR).

Now they are attempting to move him to left field, a position he has never played before. And on top of all that, he is supposedly a clubhouse cancer who everyone hates. And we’re sure the Yankees didn’t overpay this guy? What an offseason for the Bombers!

Then comes $100 for Pablo Sandoval. Again, I love the Panda if he’s hitting in the postseason. He’s a goliath. All other times? Not so much. He only had a .324 OBP last season with limited power and has always had zero speed. He’s clutch in the sense that he becomes a much better hitter in the playoffs. However, it’s also easier to do so when you’re plain ole average in the regular season.

If Boston completes a trifecta by drastically overpaying a pitcher, it would be awesome, but they kind of need to do so. Have you seen this team’s projected rotation for next season? It starts with Clay Buchholz and goes drastically down from there. Let’s leave it at that.

I’m not sure how the Yankees become incrementally better for 2015 (although would it be the worst thing in the world if they added some defensive pieces and just stood behind their pitching to win games?), but it pleases me to see Boston completing its transformation into everything everyone hated about New York.

When I first read that the Red Sox had signed Hanley and Pablo I thought “Oh crap.” Then I remembered it’s not 2002 and pitching just destroyed Major League Baseball for another season. A pitcher just won MVP and two teams not known for their power battled it out for the World Series. It was truly a happy day for the New York Yankees. But even more interesting, should Red Sox fans be excited?

I was thrilled that the Yankees did not waste nearly $200 million dollars on ‘power’ hitters who are past the midway points of their careers. Its like the Red Sox saw how much money the Marlins tossed up into the air and around their stadium to sign one star player and felt left out. They quickly paid their way into the pity party. But it’s not 2002 and that kind of money is surely best spent elsewhere.

It’s always exciting when your team pays for instant impact on the field, but I would be a little ticked off if I were a Red Sox fan. Sure, they went from worst to first and a World Series title, before falling back to worst. And yes they want to win one more before David Ortiz retires, but the Red Sox traded Hanley Ramirez away to the Marlins almost ten years ago. If he was too expensive to keep in 2005, then what is possibly worth $90 million in 2014? I don’t see it.

I do love Pablo Sandoval. He is a proven winner still in his prime. Setting aside the contract, he is an excellent addition to the Red Sox. I don’t agree with your Panda hate. He should fit in well in the small confines of Fenway Park.

So this week’s transactions are a wash for the Boston Red Sox. I like one deal and dislike the other. Its like the Red Sox final three seasons, two god awful and one great. A true wash. Without pitching Boston isn’t moving very far in the American League. No one is hitting their way to a title in 2015.

[If you missed Part one – Debating Jim Bowden’s offseason predictions]