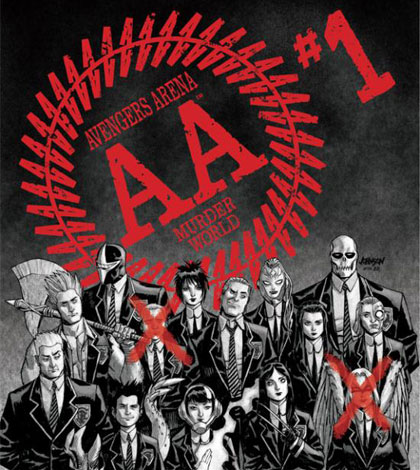 I’ll still argue that Stephen King started it all back in the 70s with his Richard Bachmann novel, The Long Walk. Sometimes ideas are just ahead of their time, or considered too out there because of being from another country, like Japan’s Battle Royale, which sits as yet unwatched on my DVD shelf. Give Suzanne Collins credit for having the right idea at the right time: everybody wants to rip off The Hunger Games.

Some might say they’re just inspired by Katniss Everdeen, as archery’s popularity as a sport has shot up in the past year. That’s a healthy influence. There’s also no doubt that the CW put Arrow on the air because it was the fastest way to get in on the fad. (Though it’s been announced this week that the network is developing a reality series called The Hunt that they promise will not result in fatalities.)

Marvel Comics will not make the same promise. This week, one of their Marvel NOW! offerings blatantly adapts the concept of “teens forced to kill each other.” Weird that that’s become an accepted trope. At least in Avengers Arena, the mastermind villain Arcade freely admits that he was inspired by reading a couple of books. But if you know the character (a long-time foe of both the Avengers and the X-Men), you’ll note that he’s had a major power upgrade. In previous appearances, he has seemed almost charming in his homicidal tendencies that were easily thwarted, but writer Dennis Hopeless makes no bones about it: characters are going to die.

Most of them are characters you won’t know, made up of members of the Runaways and the Avengers Academy, a training school set up by Tony Stark. That works for the book, though; their very unfamiliarity means it’s hard to predict who will live or die. But because they all have some sort of power, all of those kidnapped by Arcade have at least one moment to stand out.

Hopeless opens with the best-known character, X-23, the female clone of Wolverine. It’s a vision of the future in the story, a device that has gotten tiresome in Marvel NOW!, as at least half the books have used it to get our attention. But at least it makes clear that Hopeless will pull no punches on this concept. That might buy him the good will to make us actually care about the concept.

Though it’s being offered as an ongoing series, Avengers Arena will most likely have an endpoint, whether at 6, 8 or 12 issues. Either it will follow through and 15 young heroes will die, or Arcade will be defeated. Either way, it cannot be spun out too long. In the aftermath of several company-wide crossovers, something like this — compact and hopefully compelling — provides welcome, if macabre, relief.