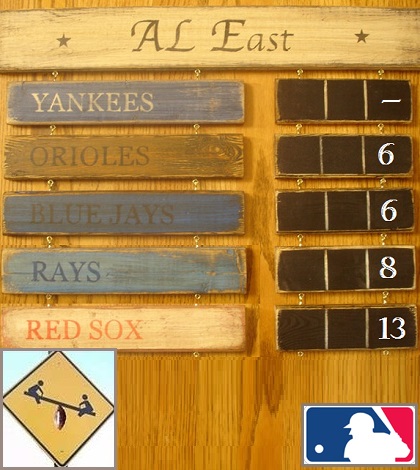 The AL East is on fire after a crazy MLB trade deadline. But can the Toronto Blue Jays catch the New York Yankees in the division? One team added aces, while the other kept a poker face. MLB sports debate.

The MLB non-waiver trade deadline came and went this past Friday afternoon. There was heaps of action; it was the busiest trade season I can remember in a while, and a ton of gigantic names switched teams.

We can argue who had the best deadline period, both from a buyer’s and a seller’s perspective. Philadelphia did a good job (for once) of reloading its farm system with the trade of Cole Hamels. Houston did a great job of adding a couple important pieces to a roster on the precipice of success in the AL West. The Mets did a good job rebounding from being the Mets and ended up with a solid bat that they desperately needed in their lineup without giving up any of their five future (/current) aces.

That’s all well and good, but the real story this deadline took place in the AL East. The Toronto Blue Jays beefed up their roster from all sides, adding the period’s best starting pitcher in David Price, the best bat in Troy Tulowitzki and some bullpen pieces to boot. Although they gave up the best prospect that was dealt during the month in Daniel Norris, they now have a legitimate shot at real playoff success.

The team they are attempting to chase down is the New York Yankees. New York has a sizable division lead right now but did barely anything to improve itself by the deadline. The Yankees added a bench bat who can play second base and that was it! That was the team’s only move despite the fact that Toronto completed all of its dealings prior to July 31, meaning NY got a sneak peek at what the Blue Jays would look like during the season’s final two months.

Staring the Jays’ roster right in the face, general manager Brian Cashman and company still did nothing. The team is much farther ahead this year than I expected, but that shouldn’t preclude someone from acting. Houston was in the same exact boat but for very different reasons, yet the Astros were still active, trying to win when they clearly have a chance.

I know this probably wasn’t the case, but it almost seems like the Yankees are letting this year ride. The team is performing better than predicted so ownership is seeing how long that can last with the pieces it already had. I doubt it’ll last through August, let alone through October. The Jays are hot on our tail.

Your pessimism this baseball season never fails to amaze me. The Yankees could be up three games to none in the World Series later this October, and you’ll tell me that since the bottom of their rotation is suspect, their opponent is hot on their tail!

Both Toronto and Baltimore are six games back of New York, and just a game behind the Twins for the final AL wildcard berth. The Blue Jays made it known, they are refusing to finish behind the Orioles, Twins, Rangers, and Rays this season. It would be a huge disappointment if they did. Missing the playoffs AGAIN means heads will roll in Canada. I’m not convinced they won’t.

As for the Yankees and their apparent inactivity, often times the best moves are the ones not made. New York maintained its farm system going forward. They are an older baseball team that can not afford to destroy what took so long to build, mainly their upcoming youth in the minor leagues. I can’t think of a single player outside of David Price who was worth shipping the Yankees best prospects out-of-town to acquire.

That statement is only true because of how well New York’s season is going. The Yankees are hitting like woah. They absolutely destroyed the White Sox yesterday, in a game that could have been a solid matchup, but ended up, after less than three innings, as a blow out. This team can hit. They are scoring runs how I initially predicted, with timely singles and doubles. But they also hit the long ball, which was no guarantee entering the year. Nearly every veteran is playing atop his game, putting exclamation points on their excellent careers. The issue for New York is starting pitching.

Toronto scooped up the prize of the trade deadline, acquiring pitcher David Price. Kudos to a team that needs a spark. While performing well at the plate, the Blue Jays stink this year in pitching. They are ranked 20th in ERA and 22nd in Quality Starts by their pitching staff. David Price will make a difference, but can he truly save a rotation in need of more than one guy? I’d go as far as to say that Toronto HAD to sign Price. Without him they had very little.

Cole Hamels was the other big name pitcher out there, but I’d have been pissed if the Yankees gave up what Philadelphia ultimately got for Hamels. He is a solid pitcher who will have a hard time living up to expectation. The bar is now set very, very high. He went to the Texas Rangers, another team desperate for a spark.

“Riding out the year” is the uninformed man’s way of saying “If it ain’t broke, don’t fix it.” The Yankees are far from broken. Toronto had a few screws loose. We now have a tight AL Wildcard race, and potentially a tight AL East division race. But there’s something special about these 2015 New York Yankees, and every other AL contender scrambled at the deadline to keep pace.

More Sports: US Soccer gains fans, but is the sport watchable?