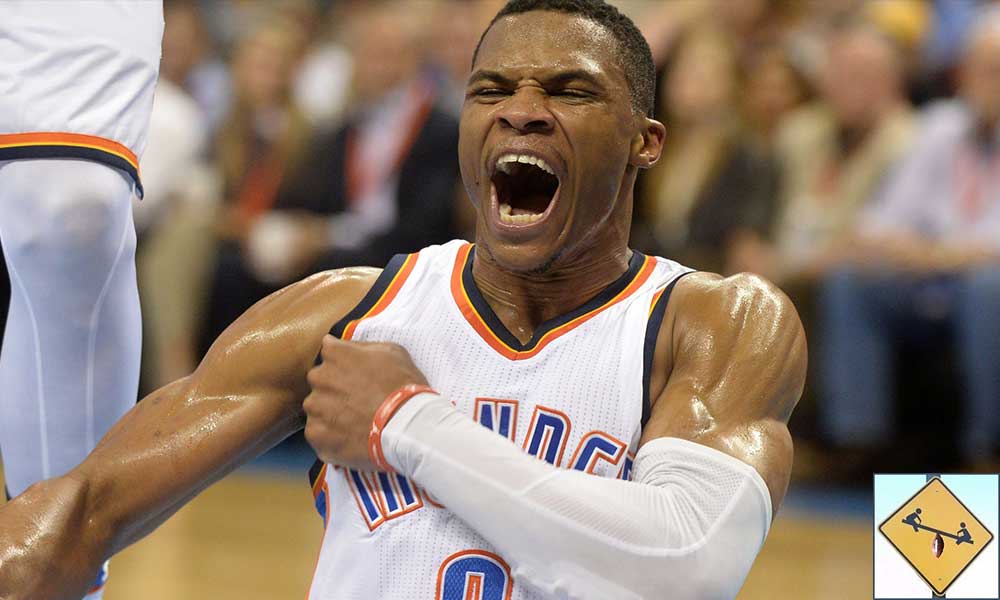 There are four great players who earned the 2017 NBA MVP award, but Russell Westbrook must win. No other player had a larger impact on his team or the game of basketball.

The 2016-17 NBA regular season has reached its conclusion. This year was one of the more exciting in recent memory in terms of individual performances. Players tossed out 40-point games like they were nothing; Devin Booker scored 70 in a game; Russell Westbrook set the all-time record for triple-doubles in a season. And that doesn’t even include the ridiculous seasons from James Harden, John Wall, Giannis Antetokounmpo, and others. This was simply a wild year for stars.

Because of that, the MVP debate is one of the most contested this century. There are four legitimate candidates, any of whom are deserving of first-place votes or taking home the award.

The four players in the discussion are Westbrook, Harden, Kawhi Leonard, and LeBron James. All four bring different things to the table. Where you vote for MVP depends on what you value most in your most valuable player.

ALSO ON BUZZCHOMP: Rick and Morty Season Three Premiere – Did You Catch It?

Do you take Westbrook? He averaged a triple-double. He dominated every game he played this season and was singularly responsible for the Oklahoma City Thunder making the playoffs. He put up the highest usage rate in NBA history.

Do you take Harden? He was arguably as impressive statistically as Westbrook and did so more efficiently. He dominated the action the same as Westbrook but seemed to make his teammates better than his OKC counterpart could manage.

Do you take Leonard? He is far and away the best two-way player in the league. There is a debate as to whether he is the best perimeter defender in the history of the league, and it only barely borders on hyperbole. Defense is often disregarded because it is harder to quantify, but lovers of the other side of the game will lean toward Leonard for MVP.

Do you take James? He averaged the most minutes per game in the league and was startlingly dominant for yet another season. He is flat-out the best player in basketball. That is a good enough reason to win league MVP. That is not always everyone’s criteria for the award, but picking the best player in the sport is not a wrong way to go.

Then there are the nitpicks to separate these guys. Westbrook didn’t even win 50 games this year, and MVP’s always win 50. He and Harden were bad defensively. Harden was poor down the stretch of the season. Leonard wasn’t nearly as dominant on offense as any of these other guys. He couldn’t handle the load they did. James sat out too much and saw his Cavaliers lurch to the finish line. No one is a perfect candidate, which adds to the intrigue.

Westbrook is my choice, not because of the triple-doubles, but because of the body of work. Obviously, if he averaged one fewer rebound per game, it wouldn’t make his season any worse. The thing that stands out for me is he was THE story of this NBA season from start to finish. I feel like that matters. As great as the other guys were, no one is going to look back on the ’16-’17 season and remember their specific performances. It will be the year of the individual performances as a general idea and the year of Westbrook. It seems arbitrary to punish him for winning 47 and not 50. Without him, this team would have won 20. He is my MVP choice.

All four players have had great seasons, that is undeniable. It’s also a solid fact that none of Cleveland, Houston, Oklahoma City, or San Antonio would be in the playoffs without their respective MVP candidates. Each player was most valuable on their team. Perhaps the Spurs and Cavs get in still, but neither would be great. Ultimately the 2017 award comes down to who owned the season. Who stood above the league to dominate beyond just NBA circles?

Russell Westbrook must win the 2017 NBA MVP award. Last year Steph Curry was far and away the most dominant player. He capped things off with his team setting a league record for wins in a season and a return to the NBA Finals. He was unquestionably the MVP. Now it’s Westbrook. Every single day the biggest NBA story on ESPN was another Westbrook triple double. Did he get one? How close was he from hitting the mark? Can anyone stop Russell from owning the court?

Not only has Westbrook led his team to the playoffs, but he’s also leading a redemption story of his own. Kevin Durant abandoned him and the Thunder last summer. OKC become Westbrook’s team and he decided to step up, stay in town, and lead the charge. Boy has he ever!


The triple double record might be the most impressive in league history. Westbrook made breaking it look easy. He put his team in the playoffs without batting an eyelash, all while Durant fell into the shadows. Headlines don’t mean much, but when you earn them every night you’re the 2017 NBA MVP.