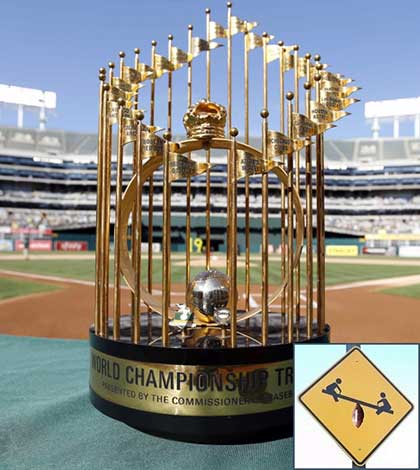 The New York Mets owned the National League in the postseason, a surprise to most as this team is way ahead of schedule. Youth is ruling baseball as the 2015 World Series gets underway. Boom!

Everyone was making excuses for Chicago’s loss by saying the Cubs were ahead of schedule; that their young lineup wasn’t supposed to mature and be ready until 2016 or maybe 2017. Well, the same thing was said about the Mets rotation. This team is way ahead of schedule. I think we need to rework what a schedule should be if we’re basing it simply off of players’ ages. A 20-year-old rookie is closing for the Toronto Blue Jays; these kids don’t care. The same goes for the Mets rotation (and, to a certain extent, the Cubs lineup).

If you take age out of the equation, there is no reason to think the Mets aren’t really the National League’s best team. They have the rotation, as well as a great bullpen led by a shutdown closer. They also have a workable lineup since the trade deadline acquisition of Yoenis Cespedes. And, most importantly this time of year, they have a player who has been impossible to retire. That helps.

What Daniel Murphy is doing is beyond comprehension. He is not that good of a baseball player! Murphy has been okay to this point of his seven-year career, usually batting in the .280s with no power and little speed and a below-average glove in the field. He is usually worth between one and two wins above replacement for a season, and that’s if he stays healthy. He’s an okay player.

And yet, this postseason, Murphy has been Roy Hobbs. He has already set the all-time record for consecutive postseason games with a home run, as well as the all-time franchise record for home runs in the postseason. His seven home runs heading into the World Series are more than he’s averaged for a full regular season during his career.

It’s stuff like this that makes the baseball postseason both unbearable as well as amazing. We had 162 games’ worth of evidence that the Cubs were a better team than the Mets, but that’s not how titles are decided…which is an obvious cop-out leading into the fact that I have no idea who is going to win the ALCS.

Anyone who bet on the New York Mets before the season, hit us up on Twitter, because I never saw their rise coming. The Mets were the best team in the National League in the postseason. Daniel Murphy’s explosion was the catalyst for their run to the World Series. Its been impressive, but unlike you, I’m confident in their AL opponent.

Kansas City is going to finish off the Toronto Blue Jays in the American League Championship Series. They already had one chance to return to the World Series with a win, and they won’t spoil their final two opportunities. The Royals have been the better baseball team so far, and the best team in the American League this season. I expect them to face the Mets in the championship round.

A Royals versus Mets World Series would be the young guns, ahead of schedule Mets, against the back to back American League champs. Sorry not sorry Toronto, but this is an incredible World Series proposition. Its fun to see a team like New York fully develop into a dominant winner so quickly. Fifteen years is a longtime to wait for another shot at the title. This is going to be an exciting World Series!

More Sports: A Historic MLB Final Four is No More