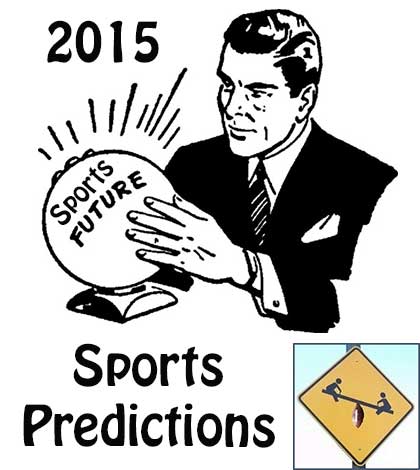 2015 Sports Predictions are the best way to welcome the New Year, but instead of picking winners Seesaw Sports is predicting which 2015 top draft pick will have the best year. Will it be Marcus Mariota in the NFL, Jahlil Okafor in the NBA, or Connor McDavid in the NHL?

The New Year is on the horizon. It’s time to make some 2015 sports predictions.

Anyone can name the Super Bowl champion or upcoming Final Four. Instead, let’s get a bit more interesting. Out of the sports world’s projected top draft picks, who is going to have the best 2015?

In football, the top projected pick is Oregon’s Marcus Mariota. He has a college football playoff game coming up in just a few days. After that, it’s all NFL offseason stuff heading into the May draft. From there, assuming he declares and gets taken, Mariota will have a new offense to learn in the hopes of playing in the NFL in the fall of 2015.

In basketball, the likely top pick will be Duke’s Jahlil Okafor. It is still super early to know what his future holds considering he is just a few months into his freshman year in college. However, with quick feet, great size and strength, there is no one right now better than Okafor. Assuming Duke makes it deep in the NCAA Tournament, he will have those big games to showcase his skills. After the April games wrap, the summer comes and the worst NBA franchises choose their hopeful saviors. Okafor is primed to be another one-and-done and be that pending savior.

The other option is hockey prodigy Connor McDavid. After breaking his hand in a fight earlier this year, he is back and playing for team Canada in the world junior championships. McDavid is considered by most to be one of the best NHL prospects the league has seen in years. He is ranked ahead of your BU boy Joe Eichel on nearly every draft board. If he finds himself in the right place, McDavid may skip the AHL and be in an NHL lineup before the 2015 season is up.

I love these types of 2015 sports predictions and I expect you to follow up in form. But before I make my pick between Marcus Mariota, Jahlil Okafor, and Connor McDavid for best year in 2015, I feel its necessary to also predict which team they will land on professionally.

In the NFL the 2015 Draft’s top pick goes to the Tampa Bay Buccaneers who finished the season with only two lousy victories. Both the Philadelphia 76ers and Minnesota Timberwolves are holding strong as the NBA’s worst teams, but I’m giving the top pick to the Sixers. They nearly set the record for losing to start a season and are unquestionably awful. Things are more clear in the NHL, where the Edmonton Oilers have a measly 21 points on the season.

It’s not much of a prediction to put each man on their new league’s respective worst team. However, only one player has a real shot at turning things around for their new team in 2015. And only one player can truly make a national splash before the drafts go down.

Canada’s own Connor McDavid going to Edmonton is a nice story, but he won’t have the best 2015. It’s certainly an accomplishment to jump straight into the NHL, but the Oilers need more than McDavid to be successful and his 2015 will reflect this.

Marcus Mariota will lead his team to the first College Football Championship of the playoff era. He will find himself on the Tampa Bay Buccaneers after declaring for the 2015 NFL Draft. But he will not have the best 2015. The Bucs fell way short of expectations this season and Mariota will enter the NFL with the weight of a franchise on his shoulders. None of the current Tampa Bay quarterbacks are accomplished enough to hold off Mariota, so expect him to play from week one. I believe he has a great chance at being successful longterm, but the odds of him throwing lots of interceptions his first season are high. He will show signs of greatness while putting up a slightly above average first NFL season.

Jahlil Okafor has the honor of the best 2015 for a top draft pick. His Duke Blue Devils will have to fight tooth and nail to defeat Kentucky in the NCAA tournament, but I expect him to lead Duke to the 2015 Final Four. Then going first overall to the Sixers, Okafor will have an instant impact on a team and a city desperate for a star.

It’s not just that Philadelphia is bad, they are really, really bad. But they also have a lot of youth and former college stars. Nerlens Noel and Joel Embiid will mesh nicely with Okafor, as either Embiid or Jahlil shifts into a power forward role. The 2015 Sixers will be tall and strong, a rare blend in today’s NBA.

Agree or disagree? Which top draft pick will have the best 2015? Leave your picks in the comments, before Todd chimes in for Friday’s Seesaw Sports, the first of the New Year.

Next Post: Predicting a title – Yankees, Celtics, or Michigan Football

Photos courtesy of the NCAA, Oregon University, and Duke University.