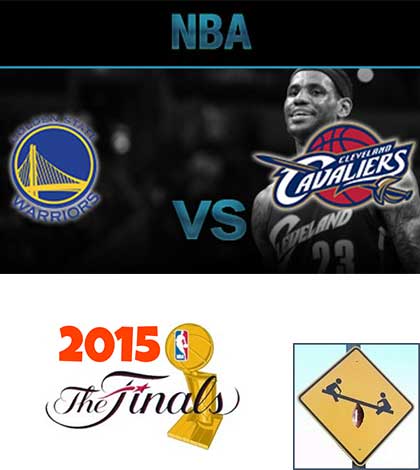 The 2015 NBA Finals can’t get here soon enough, but will it be as good a matchup as fans hope? The Golden State Warriors are dismantling teams, but the Cleveland Cavaliers will bring the best player back to the Finals. Can King James hold off Stephen Curry’s onslaught?

Roughly midway through the NBA conference finals, it’s looking like we are going to get a championship match between the two favorites: the Cleveland Cavaliers out of the East and the Golden State Warriors out of the West.

This isn’t a bad thing and often happens in this sport. In fact, the top four seeds are all still alive at this point, a result nearly unheard of in playoffs for the other major pro sports. But basketball routinely delivers the best of the best competing for the title, and it’s grand.

This year seems to lack sizzle though. Perhaps it’s just me or it’s a peripheral reaction from insiders and diehard fans, but an NBA finals matchup between the Cavaliers and Warriors (if that comes to fruition) seems perfect yet boring.

The main drawback is we aren’t sure if it will even be competitive. By all accounts this Warriors club is better than the Spurs team that dismantled LeBron’s Miami Heat last season. That’s strike number one.

Strike two is that Cleveland is decimated with injuries to its most important players sans LeBron. Kevin Love is out and has been out for some time. Kyrie Irving remains questionable and has had trouble seeing court time in the Eastern finals.

With the Big Three down to Just One, the Cavs become boring and predictable on offense, something the elite Golden State defense should be able to suffocate. And while Cleveland is admittedly better on defense with both Love and Irving out (both are well below average defensively), it isn’t a good enough unit to slow down what GS does anyway.

So we are still left with the league’s best team competing for a ring against the league’s best player; that’s something worth celebrating. If the games are bad though and the series is quick, it’ll leave a sour taste in everyone’s mouth.

I don’t think you have to worry about a quick series in the NBA Finals, but it’s certainly a bit less exciting with all of the injuries Cleveland has suffered. That being said, they have and are enduring them with rather excellent results.

LeBron James is at the point in his career where he can and should be able to carry an entire team on his back for a postseason run. He is that good and makes all of his teammates that much better, regardless of who is on the court with him. I refuse to count out King James and the Cavs, despite the injuries. If any team can pull of what will be a Finals upset, its LeBron and this Cleveland squad.

Now for a bit of reality. Golden State is blowing teams away, simply dismantling them to their core. It’s both excellent and lackluster to have them meeting the Cavaliers in the Finals, assuming both teams win out this week. They were the best team all season and should be representing the West.

It’s unfortunate that the best NBA Playoffs matchup was in round one between the Los Angeles Clippers and San Antonio Spurs. But neither of those teams were beating the Warriors. Plus, that was just the best matchup so far.

The 2015 NBA Finals, assuming things go as planned, will be excellent. The Warriors will be favorites, but don’t expect it to be by much. LeBron has all the experience. Golden State has none when the Finals are concerned. This probably won’t play a huge factor in the series, but in games one and two expect King James to take full advantage.