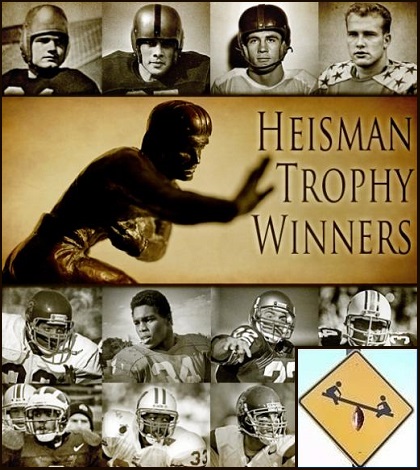 Running backs have dominated college football, but the 2015 Heisman Trophy will not go to a leading rusher. It’s a quarterback’s award to lose, and being undefeated will keep the trophy in their hands.

As recently as two weeks ago, the Heisman Trophy was not up for debate. LSU’s running back Leonard Fournette had already won the award despite there being a month-plus remaining in the college football season. He was that good.

Now, a couple of games later, Fournette has been shutdown two weeks in a row and suddenly the rest of the pack has caught up. But who in that pack is actually rivaling him, or has passed him? And what matters most for the Heisman Trophy; is it stats, wins or a combination of both?

If it’s stats, there are a few main contenders to Fournette. Baylor’s wide receiver Corey Coleman has been a one-man wrecking crew. He broke the school single-season touchdown record like a month ago. Yet we have mixed signals as to how good he will be with true freshman quarterback Jarrett Stidham now behind center. Since QB Seth Russell was knocked out for the remainder of the season two games ago, Coleman has had one monster game (200+ yards and two touchdowns) and one nothing game (51 total yards).

Stanford’s running back Christian McCaffrey is another stats contender. Although the Cardinal just lost its second game of the year, McCaffrey continued his 100-yard games streak, pushing it to eight straight. Over that span he has also scored eight touchdowns.

If wins are more important to someone being the nation’s best player, how is Clemson QB Deshaun Watson not number one? It’s not like his numbers are bad either. And with the way other top-10 teams are falling this time of year, keeping the Tigers undefeated is an accomplishment in and of itself.

The combo guys (wins and stats) are the most intriguing bunch, as you would probably assume. Alabama’s running back Derrick Henry and Ohio State’s running back Ezekiel Elliot are 1 and 1a in terms of leading top teams from the running back position. It’s actually helped Elliot’s Heisman bid that his quarterbacks have been so flaky.

And then there’s Navy’s quarterback Keenan Reynolds. He just broke Montee Ball’s FBS career rushing touchdown record this past weekend and has led the Midshipmen to a top-25 ranking.

I personally always have a soft spot for the stats guys in this argument, because I find it silly to pen the hopes and outcomes of an entire university on one man. Just because a team doesn’t win all its games doesn’t mean its best player isn’t elite. There are dozens of other guys on the roster as well that determine the outcome of football games.

That said, Henry and Elliot look like the favorites at this point. Can the Heisman actually go to a non-quarterback this season?

The last five Heisman Trophy winners have been quarterbacks, with nine of the last ten going to the man under center. Mark Ingram in 2009 was the last player who didn’t play quarterback to win the award, but will a running back seriously take home the trophy this season? I say no.

The 2015 Heisman Trophy is not going to a running back for two reasons. Winning does matter, and so does the fact that four of the top six candidates all run the football for their teams. Before LSU started stumbling, Fournette had the award locked up. But now the other running backs have caught up, and none of them stand out as the best player in the sport. Alabama’s Henry is currently the cream of the running back crop, because his team looks the most dominant. But OSU’s Elliot is so close to his level, that picking one over the other is impossible.

With the running backs all so close together, they become eliminated from the Heisman Trophy conversation. Only one player has truly separated himself from his positional peers, and from the college football landscape as his team keeps winning. Clemson’s quarterback Deshaun Watson will win the Heisman Trophy if his team wins out and remains undefeated.

Winning every football game is an enormous barometer for college football dominance, and as a quarterback, it gives you a leg up on the competition where the Heisman is concerned. Thinking otherwise is foolish, and Watson has the stats to get him the trophy. He’s currently thrown for nearly 2600 yards, with over 70% completion, 23 touchdowns, and only 8 interceptions. His adjusted QBR is currently 85.6, and with three games to go he can easily eclipse the 3000 yard mark, and potentially climb his touchdown total over 30 for the season.

The Heisman Trophy is a quarterback’s to lose, and unless Clemson falls, it will be hard to take the trophy away from its man under center.