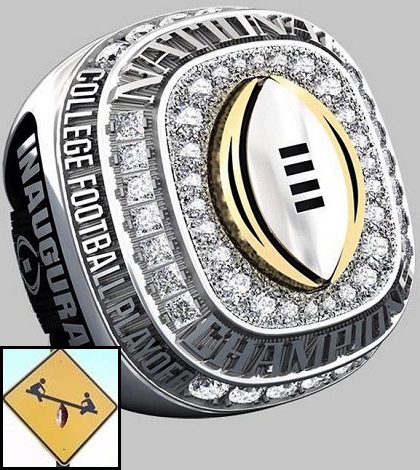 The Preseason edition of the 2015 College Football Rankings are out, with two powerhouse divisions stealing nearly half of the top thirty spots. Is it best to represent the SEC West or Pac-12 South, or hail from ANY other division in college football? Four playoff spots are up for grabs.

The preseason edition of the college football national rankings have been released, Preseason Rankings via ESPN, and the season kicks off in just a few weeks. Entering the second ever season of the four-team College Football Playoff, we are still learning what’s important and what’s ideal for a team to make it into the championship hunt.

Last year, the Big-12 powers got slighted because their conference held no title game to determine a true champion and to add another quality win to one squad’s ledger. This year, we seem to have a different problem forming. Although it’s early and preseason predictions often turn to crap, there is something noticeable happening.

There seems to be a cluster of talent forming in very small divisional chunks.

ALSO ON BUZZCHOMP: How high is Jameis Winston’s rookie ceiling?

Some quick math pegs nearly half of the top 30 schools in the country in one of two divisions. Not one of two conferences; one of two DIVISIONS; it’s insanity!

Where does that leave each of these team’s chances of making it through their regular season and into the playoff? Likely somewhere between slim and none individually. But collectively? It seems like a near guarantee that at least one SEC West member and one Pac-12 South member will be playing for a championship.

So would you rather be one of these talented schools with your path to the playoff covered in blood and guts and glory? Or would you rather be a big fish in a small pond like a Clemson, Wisconsin or TCU? One slip-up likely sidelines this latter group from contention, but their path to advancement is so much easier.

My initial reaction is to be a college football team in one of those two divisions, either the SEC West or Pac-12 South. Strength of schedule is a large barometer in this new College Football Playoff era, and if you can’t beat the best, you aren’t one of the best, and don’t deserve to make the final four. Going undefeated is all well and good, but ultimately means less than losing twice and playing a gauntlet of top-tier teams.

Yet after looking at the actual Preseason Rankings (via ESPN), I’m no longer sold on this madness. Teams in the two powerhouse divisions will beat one another up. They will be hard pressed to finish the season with two or fewer losses. Other top ranked schools will not have this problem, however. Three of the top five teams, in fact, do not have this problem at all, and only one of them is in a “powerhouse” division.

This is not to say that ranking high to start the year is the be all, end all, or that the other top five teams not named Alabama play easy schedules. Yet the other top five teams definitely play easier schedules than Alabama, and ranking high to start the season ALWAYS helps. Teams outside the top ten can slide up, and teams ranked five to ten can move into that coveted top four. But it usually takes a loss by one of those top four teams in order for another school to steal their spot.

This is where the logic of being in a power division fails. Three of the top four schools, the teams who qualify for the playoffs, are not in power divisions and have ‘easier’ schedules. They must lose for another team to steal their ranking, yet the likelihood of them losing is infinitely smaller considering the strength of their schedule. All of this hinges on the validity of the Preseason rankings, but if I’m Oregon at five, I’m feeling pretty damn good about myself.

Oregon is not in one of the two power divisions, yet does play in the Pac-12. This gives them a strong schedule, without it being one of the hardest. They are in the best position to swoop in and steal a top four spot. Alabama is also sitting pretty. They can lose twice and still retain a top four rank, unless several other schools all go undefeated.

Because going undefeated is still so rare, with only one or two teams a year pulling it off, it’s the schools like Oregon in the Pac-12 North and Georgia in the SEC East (ranked ninth) with the most well-rounded opportunity for movement up the top twenty-five. The best place to be is in the lesser division of those power conferences.