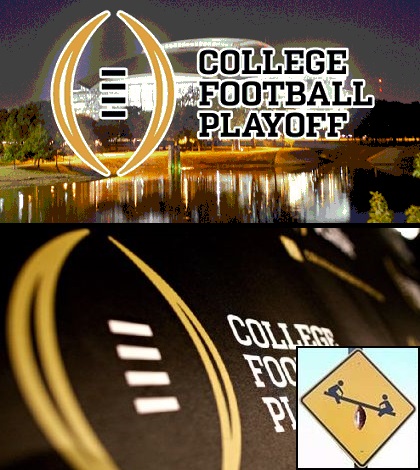 Calling both Ohio State and Florida State pushovers is a bit much. They are rightly underdogs in their respective national semifinal games, but that doesn’t mean they will get blown out or even necessarily lose.

It’s funny that the final four worked out like this because the top two teams, Alabama and Oregon, are a substantial tier above the rest of the country, but both have severe flaws that make them beatable.

For Oregon, we haven’t seen those flaws in months. The Ducks possessed an underlying failure to protect their quarterback for the first few weeks of the season. They also lack the skill on defense to match their potent offense (as is always the case).

For Alabama, the defense is great, but not historically so. The offense is supremely talented but led by a shakier-than-the-numbers-indicate QB. If he’s not playing at home, quarterback Blake Sims struggles with consistency. FYI, this playoff game will not be played in Tuscaloosa, AL.

It just so happens that neither of these teams’ faults are enough to give their opponents the edge.

For Oregon – FSU, the Ducks are more than a touchdown favorites at last glance. That seems right. FSU was such a shaky undefeated team that it continually dropped in subsequent committee rankings even while it kept winning. Pulling win after win out of your ass is not a gameplan. Also, the Seminoles just generally deserve to lose. These football/karma gods that everyone casually speaks of? They don’t exist if FSU wins back-to-back national championships. That much we know.

Alabama – OSU is a bit different because Ohio State is on its third-string quarterback. He might be just as good (or better!) than both of the other Heisman-level QBs. But then again, he might also not be. To boot, Alabama is routinely given a few extra in point spreads because the casual gamblers around the country bet up the favorites. And there is no bigger national name right now in the sport than Alabama.

These two factors lead to the Crimson Tide being close to double-digit favorites for the semifinal.

If I had to pick each game against the spread, it would be a long deliberation. If I was simply picking winners, give me the two favorites. The lines are that way for a reason.

You make strong cases for both favorites, but I can’t agree with you on the ultimate Championship game matchup. Oregon will be facing Ohio State, it’s that simple.

The SEC is a powerhouse conference, there’s no denying that. But something special is cooking at The Ohio State University. The Buckeyes have overcome adversity at the game’s most important position multiple times this season and Urban Meyer is rolling. It’s not a knock on Alabama, its simple praise for Ohio State that yields my pick. The Buckeyes make the 2015 College Football Championship.

As for undefeated Florida State facing off with Oregon, I can’t help but feel a little west coast bias. I’m not willing to write off FSU’s undefeated season. No one can take away those victories and I don’t really care how they won. They won every game on their schedule. But the ACC is not the Pac 12 and Oregon is way too fast for FSU.

Oregon’s offense will run away with this game against Florida State. The defense will give up a few scores to Winston, but not enough to matter. I like Oregon advancing to face off with Ohio State.

The 2015 college football championship will be Ohio State versus Oregon, with the Ducks winning the title. OSU will keep it close, but the high powered offense of Oregon finishes them off 35-21.

I think Oregon wins as well. After a bit of scuffling to start the year, the Ducks are sailing smoothly in all departments and have the Heisman winner at quarterback. Meanwhile, as mentioned, Alabama seems to get a bit of a bump that it doesn’t really deserve. The Crimson Tide is just not quite as good as its been in years past.

That’s not to say this is a bad Alabama team. As one of two favorites in the inaugural college football playoff, the Tide is obviously really good. But the country at large feels as though this is same ole Alabama, meaning Nick Saban and company will steamroll to another title. I’m with you; I think they fall short, just to the ‘special something’ that’s cooking in Oregon, not Ohio State.

Photos courtesy of USATODAY.com, the NCAA, and College Football.