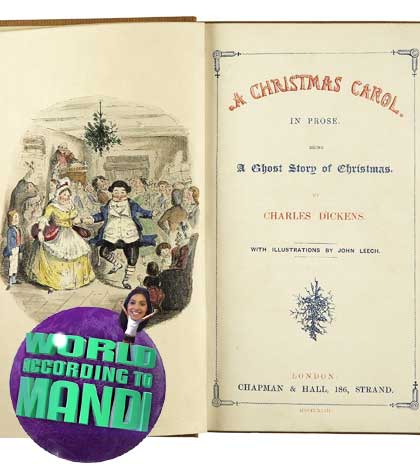 I can confidently say, without a doubt, that I’ve seen every single version of A Christmas Carol.  Love it! Growing up, it was my Dad’s favorite Christmas movie.  He’d watch any and every version imaginable.  I of course would sit there, baking cookies with my mom, and watch the movies with him. It fascinated me how there were so many different versions of the same film! You’d think that watching the same story would get old, but no, it never does! Let me lay it down for you, the versions of A Christmas Carol everyone should know and love.

My all time favorite version of the more traditional telling of A Christmas Carol is the 1970 film Scrooge staring Albert Finney.  This one is a musical too! A musical and a Christmas film in one, oh how my heart swooned as a child.  This version of the film was extra special. My dad and I would always wait to watch it together! He of course owns so many different versions of the film, but it was way more fun to anticipate, so we’d search and search to find it on TV.  What makes this version stand out, and the reason why I love it so much more than the others, is because of the musical aspect that tied the story together.  It made it even more uplifting, especially the ending when Scrooge finally realizes the true meaning of Christmas, embraces it and runs through the streets singing the best song ever! Check it out right here! Fabulous right?  I love it! It makes me want to watch and sing and dance along!

While I love the traditional versions of A Christmas Carol, I love the non-traditional ones EVEN more! There are two versions that I have to watch EVERY year, strike that, I NEED to watch every year! The first one is A Diva’s Christmas Carol.  This film was originally a VH1 version of the classic story and stars Vanessa Williams as a singer, Ebony, who lost the meaning of Christmas. She’s in an all girl group that raises her to stardom and one of the other singers dies, her Marley. Her tour manager is her Bob Cratchett, but he’s also her love interest that she dumps on Christmas.  Check out the trailer for the film here.  If you have not seen this version you totally should. Personal favorite!

I absolutely LOVE the two versions of the film that I’ve shared with you above, but there is one that stands out above any other version of A Christmas Carol.  It’s another non-traditional one and it is absolutely fabulous! It’s a film called Ebbie, possibly my all time favorite Christmas movie. It stars Susan Lucci as Ebbie, a department store owner that has of course lost the meaning of Christmas.  This one first aired in 1995, and ever since then I have LOVED it.  I’ll DVR it if I can’t catch it on TV just to make sure I watch it at least once during the Christmas season. Ebbie, our Scrooge, is mean and ruthless! She runs her department store with no regard for the people that work for her.  She’s selfish, alone, and she’ll end up dying young if she doesn’t change her ways! Her Bob Cratchett is a female employee named Roberta and tiny Tim is Taren Noah Smith.  That name should ring a bell; he was the youngest son, Mark, on the 1990’s television show Home Improvement. Ebbie is a must see movie this holiday season! Lifetime usually airs it at least once, especially right before Christmas. Make sure you watch it and trust me you will not be disappointed!

You really can’t go wrong with any version of A Christmas Carol, but make sure to check out my top three.  The movies always get me into the Christmas spirit and there are so many other great versions that I didn’t even touch upon! So this weekend, while you’re baking cookies and rocking a Christmas sweater, make sure you watch one of the many wonderful versions of A Christmas Carol!