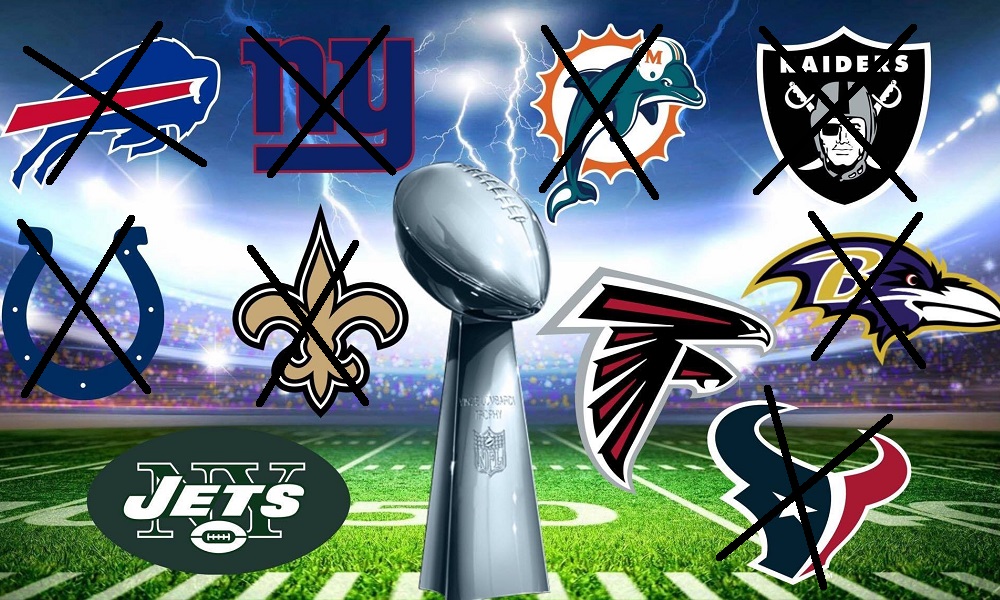 The New York Jets are watching this year’s Super Bowl from home, but that doesn’t mean the entire organization top to bottom doesn’t have hopes and dreams. The Jets Super Bowl 51 Wish List.

Super Bowl 51 will once again see the New England Patriots competing for the Lombardi trophy, this season versus the Atlanta Falcons. Both teams enter red-hot, with MVP caliber quarterbacks leading the way. Do the New York Jets want the championship within their division once again, or must they root against their arch rival? This is Gang Green’s Super Bowl wish list, every hope and dream entering and exiting the big game in Houston.

Despite the added excitement of having the defending champions within the AFC East next season, the Jets and their fans do not want this. We’ve been chasing the Patriots for years now, so it matters not whether they are champions of the entire NFL. New England has been the perennial champion of the AFC East for as long as I can remember, so we want the Falcons!

An Atlanta victory would be amazing. It would be the first time Tom Brady and the Patriots lost a Super Bowl to anyone other than the New York Giants. It would be Matt Ryan‘s first ring and the city of Atlanta’s second title ever in all sports. That’s something great to root for. Although a New England loss guarantees Tom Brady and company will return next season hungrier than ever for a championship. What’s worse than a hungry Brady looking to avenge his Deflategate suspension? Brady looking to avenge a Super Bowl loss for as long as it takes for him to once again hoist the Lombardi trophy. Maybe a New England victory isn’t so bad after all.

A year after Peyton Manning won the Super Bowl and retired on top of the sport, Brady has a chance to do the same. A Patriots victory would give Brady his fifth ring, the most ever for a player. It would solidify his legacy with his second title in the last three seasons, offering him the opportunity to ride off into the sunset as the best we’ve ever seen. It’s a rare thing to be in a position to retire with a title in hand. Brady is currently 39 years old and while I think he will play until the age of 42, its hard to pass up an opportunity to finish on top.

New York Jets fans should be foaming at the mouth with excitement. This is the next best thing to an Atlanta victory. The retirement of Tom Brady would open the door in the AFC East. New England would still have Bill Belichick, the greatest coach ever, but its unknown whether a franchise quarterback currently resides on his roster or not. Nobody can win without solid quarterback play. Jets fans know this better than most. Watching Brady ride into the sunset would be cause for immediate celebration.

With so much riding on the outcome of the game for Jets fans, its hard to care who wins MVP or how players on either team actually perform. Instead we turn to occurrences during Super Week and two things that all New York fans are desperately waiting for.

The football team is without an identity on offense until a coordinator is signed. Having our team be a desirable destination seems too much to hope for, but bringing in an OC that compliments the current offensive talent is not. The Jets have a lot of playmakers on offense, but need a coordinator who will scheme to their strengths. It’s also very difficult to sign a veteran quarterback without an offensive coordinator. How do you know what type of signal caller you need? You don’t.

I realize Taylor will be coming off an injury, but stealing him away from the division rival Buffalo Bills would be sweet. Taylor can wow you at times, but his greatest strength has been his lack of turnovers. The Jets need a quarterback who won’t throw interceptions or take a ton of sacks. Taylor can scramble and keeps the football in the hands of his own offense. He’s a veteran who still has a lot to prove, having never taken his team to the playoffs. He’s a good fit in a fast paced offense full of weapons, like the Jets will have.


The Jets might not be in Super Bowl 51, but there’s still a lot to watch for and hope for during the big game. Will Tom Brady retire on top? Will the Falcons defeat the Evil Empire? Can the Jets sign an offensive coordinator and veteran quarterback before the season officially ends? Its an exciting time for New York, so keep your eyes on those news tickers and your emotions in check.