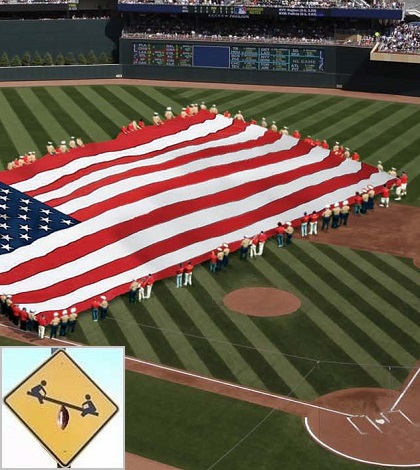 Let’s keep this right on going because nothing is better than making nearly baseless predictions that can come back and bite you in five to six months.

My AL playoff teams were New York, Detroit, Texas, Boston and Cleveland. I like the Tigers to defeat the Red Sox and win the AL Pennant. In the National League, my playoff teams were Washington, St. Louis, San Francisco, Atlanta and Los Angeles. I actually like the Braves to move through the Wild Card play-in all the way to the World Series by defeating the Cardinals in the NLCS.

As for the 2014 World Champion, Atlanta seems like the most well-rounded team to me when healthy. They are not currently healthy but should have enough starting pitchers back by October to contend. I like the Braves this season to come out of a surprisingly loaded National League and win the ring as well.

It seems only logical to also pick the award winners for the year because if you thought picking playoff winners six months out was arbitrary, you ain’t seen nothing yet!

American League MVP has to go to Mike Trout. He arguably deserved it each of the past two seasons. I see a slight decline from Miguel Cabrera meaning Trout is the beneficiary. For NL MVP, things seem more up in the air. Keeping with my Atlanta trend, I think Jason Heyward wins it. He has the skills and talent to do so. This is the year he finally puts all his abilities together.

AL Cy Young will go to Justin Verlander. Many folks have been writing him off, but I expect a season back to old Verlander, which will be good enough to beat out the likes of Yu Darvish, Chris Sale and others. In the NL, my Cy Young award will go to not Clayton Kershaw because that’s boring. Instead, I think Adam Wainwright grabs the crown. He is a bit under the radar as far as aces go, but no one is consistently better than Wainwright year in and year out.

The Manager of the Year awards usually go to guys who brought a team to an unexpected height. It doesn’t always go to the best actual manager or even the manager of the best team. With that being the case, the AL MOY will clearly be Terry Francona. None of my other playoff teams will be a surprise, but Cleveland beating out the likes of Tampa Bay and Oakland for a playoff spot will make Francona the odds-on favorite. In the NL, a similar storyline will take place with Bruce Bochy in San Francisco. In a year with a number of brand new managers and first-year guys, it will be two old vets who take home top billing.

Of course, if the Houston Astros continue to play the Yankees all season, perhaps they’ll grab a playoff spot and Bo Porter will be Manager of the Year.

A man after my own heart; you know how I LOVE baseless predictions (pun intended). This baseball season has a lot of middle class teams, meaning above average but not championship caliber. Let’s see how it plays out.

My AL playoff teams are New York, Detroit, LA Angels, Boston, and Oakland. The Athletics win the wildcard play-in game against the defending champs, but fall in the next round. I like the Angels defeating the Yankees to win the AL Pennant (Jinx!). As for the National League, my playoff teams are Atlanta, Pittsburgh, LA Dodgers, St. Louis, and the New York Mets. The Cardinals take care of the Mets and continue their late season dominance by defeating the Braves to win the NL pennant and make the World Series.

We’re either both going to be crowned geniuses or exposed as frauds, because our picks are eerily similar this season. The 2014 MLB World Series will pit the LA Angels against the St. Louis Cardinals and everything will fall right for LA. Josh Hamilton and Mike Trout will prove too much for the Cardinals’ pitching staff and LA has enough pitching to close the series out in six games. The title returns to the Los Angeles Angels of Anaheim after twelve years.

American League MVP seems Mike Trout’s award to lose. I agree with you, he finally takes home the crown. In the National League you’re forgetting too many other key players to hand the award to Heyward. This comes down to Andrew McCutchen and Joey Votto, with Votto taking home the award after putting up stellar numbers on a lackluster team.

The Cy Young awards are tricky for me to identify. I actually think Yu Darvish will beat out Verlander for the AL Cy Young award. In the NL Kershaw will in fact fall short, hampered by injury. I like his teammate Zack Greinke to dominate and win it.

The Mangers of the year fall to my surprise playoff teams in Oakland and New York. The Athletics manager Bob Melvin wins in the American League, while Mets manager Terry Collins wins in the National League.

My biggest prediction of all… Todd Salem will NOT win our fantasy baseball league this season. You have won every year, literally every year since we started our league four years ago. Maybe longer now. You will be taken down this season, to at least second place.

[If you missed Part one – MLB Opening Day predictions]