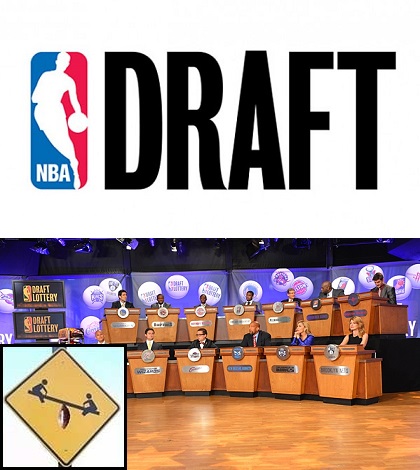 The “losing environment” that the Jets avoided is a real argument that people use against the tanking strategy. Philly rookie Michael Carter-Williams got off to a wondrous start this season. He began to tail off as he hit the proverbial rookie wall, but now seems to just be playing for the sake of it. If he develops a number of bad habits and lacks any veteran to teach him otherwise, how is this a good move for the 76ers this season? He is supposed to be a major cog once this thing gets turned around.

That being said, the rules are almost designed to encourage this type of behavior at this point. There is nothing to be gained by winning games. Take the New Orleans Pelicans for instance. They traded away a top six (I believe) protected pick this offseason, meaning if they finish outside the top six, their first pick goes to the aforementioned Sixers. However, if they finish as one of the six worst teams and their pick falls inside the top six, they keep it. What on earth could be the reasoning behind New Orleans attempting to win ballgames at this juncture? The only outcome is they may be forced to give away their first round selection.

Rules like protected picks and the lottery were designed with good intentions. We all understand this. But they aren’t working. To be honest, I have never understood why losing is rewarded in any type of draft. Would all of these professional sports leagues actually lose their precious parity if the worst team didn’t get the best draft pick? In the case of the NBA, it seems that the same teams are good and the same teams are bad year in and year out, regardless of where they are drafting. In other sports, the draft has even less of an affect on the following season since so many more players go into creating a lineup.

I have heard two alternatives to this old, reward-the-loser technique, BOTH of which I like much more than the current draft system.

One is that the best team to miss the playoffs gets first pick. In basketball, this would be the lottery system but in reverse. Reward the teams that tried their hardest but fell just short of the playoffs. Would teams purposely lose down the stretch of seasons because they would rather finish ninth than grab the eighth and final playoff seed? Perhaps, but teams that have a shot at playoff basketball rarely pass it up. I don’t really see a downside to this. The worst team in the league would be given the 14th pick, which has potential to help them out, but if you want a better pick than 14th, play better!

The other solution is being discussed by NBA nerds and execs because it was presented to them by someone who cares about the league and is pretty smart to boot. It’s a draft wheel, where each team’s pick is slotted for 30-year cycles. Everyone has a slot and knows where they will pick every draft for the next 30 years (until it rotates around and everyone has picked at each spot once). Records don’t matter, playoffs don’t matter. Nothing affects the draft slotting. So no point in tanking here folks! The only drawback of this that people have mentioned is some convoluted theory that college players will then change the years they leave school based on what NBA teams are picking when…except since when do college players get to decide who selects them? A really great player may delay his departure from school for a year to be selected by a certain team the following season, but what if that team doesn’t want him? The prospects do not control the draft and that will continue to be the case with this system.

Hold on just a second. The current draft system is not designed to reward the loser. That may be a by product of how its set up, in some instances, but it is definitely not the design or the point. I’ll get to your alternatives in a second, but you are completely avoiding the real issue in the NBA. It is a star driven league and it barely matters which guy fills the five through eight spots on the roster. Sure, sure, the sixth man is important and all, but that man is not winning any team a championship. These players are basically interchangeable, making anything outside the top ten of the draft a wash and any one trade for a star-caliber player that much more significant.

We have what you called a “reward the loser system” in the NFL and MLB as well. In the NFL this does not seem to be an issue. No one player, outside of a quarterback, can really change an entire franchise. By rewarding the bad team, who probably has a bad quarterback, you are giving them the opportunity to get one. This seems to work quite well. In baseball the guys being drafted enter the minor leagues, are developed into major league players, and then get called up. No one cares who is picked outside the top five, on average, because you won’t see them play for at least a year or two. We praise farm systems and growth and development of talent. The draft is only a piece of that puzzle. Hence the system works well.

Now back to basketball and the NBA’s problem. I like one of your alternatives and think the other is stupid. The entire point of the draft is for teams to get better, become competitive, and acquire talent for the future. It sells hope to fans and gives college players something very specific to play for. They want to get drafted. They want to be called up into that next level. Who needs new talent the most? Why its the bad teams, the ones that sucked it up the past season. We are not rewarding the loser, we are acknowledging that the loser teams need the most help and therefore, its in the best interest of the league that they have an opportunity to draft that help. What has become of this is certainly unfortunate, if not annoying and counter productive. Tanking throws dirt in the face of the draft and the league.

I like your first alternative, but it needs some tweaking. Rewarding the teams that just miss the playoffs is a noble endeavor and does encourage more winning. Yet it doesn’t stop a team like Memphis from tanking to miss the playoffs in order to get a number one pick and be a powerhouse next season. Its the same logic, now with higher stakes and more immediate results. I think the lottery system for the top picks should be thrown out. Instead, give the worst five teams the top five picks and then give the five teams who just barely missed the playoffs picks six through ten. Now you have a lot to play for and less to tank for. A good team won’t tank for the sixth pick and a bad team can’t tank to enter the lottery. They have to be the absolute worst to get one of the best picks. I like this approach.

What I hate is the stupid 30 year fixed slot draft idea. How big is AAU basketball? Its huge, so all NBA executives know which guys are going to be great in the next three to five years. You want to talk analytics and projections, now every team has a lot of homework to do when their top five pick is coming up on the wheel of draft stupidity. This removes everything from the equation and basically punishes the Cleveland Cavaliers. They keep getting great players for their fans to enjoy and those great players inevitably move on because ‘God Hates Cleveland.’ But now insert the wheel of destiny and Cleveland has nothing. Oh, in ten years it can pick first. So enjoy being a doormat until then. No thank you.

I know where you’re headed with this. You want more D-League basketball. Let’s save that for next week.

[If you missed Part one – NBA tanking time]