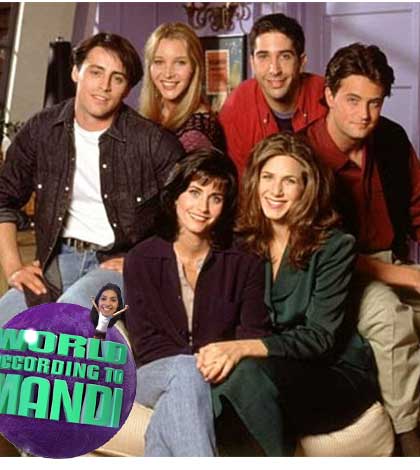 If I had to pick my all time favorite TV show, it’d definitely be Friends! It’s still super funny going on twenty years now. We just passed the 20th anniversary of Friends people! It premiered September 22nd 1994 and I wish I could say that I watched the pilot when it aired, but I did not. Too young, not hip enough yet. But once I started watching Friends, around season three, I was so hooked. I’ve of course seen every episode, and have totally re-watched every one as well. It’s cool to lose count, right guys?

On Monday, the actual 20th anniversary, TBS ran a marathon of the all-time fan favorite episodes. How amazing! I had that bad boy on all day and most of the night; while I was doing work, chatting on the phone, you name it. And they were definitely some of the best episodes; pivot! I couldn’t believe how much I missed my ‘Friends,’ not having binge-watched the show in forever. And I now know, if I was literally forced to watch only one TV show over and over again, it would be Friends!

After enjoying hours and hours and hours of Friends episodes on Monday, I felt like I’d actually caught up with old friends! Who didn’t love when Phoebe got pregnant with her brother’s triplets? What about when Monica got stung by a jelly fish and Joey was gun shy, so Chandler had to pee on her foot? How about when Ross bought a couch and was too cheap to get delivery so he and Rachel tried to get it into his apartment themselves and he kept yelling “Pivot, pivot, pivot” up the stairwell?” To this day, any time anyone says “pivot” I can’t help but chuckle to myself and think of Ross! And let’s not forget when Rachel was in labor for hours upon hours, and prior to that baby coming out she shares a room with Janice, Chandler’s crazy ex. So many great memories!

That was the best part of Friends; there were so many amazing episodes and moments in these characters’ lives. So many scenes that still make me laugh all these years later! No matter how much time has passed, watching an episode is always like meeting an old friend you haven’t seen in years. It’s like no time has passed, picking up right where you left off.

Remembering all these wonderful episodes made me think of my all-time favorite Friends episode! Drum roll… The one where Joey, Chandler, Monica, and Rachel all play the trivia game with intimate questions about one another and Ross is the moderator. Rachel misses the question “What is the name on Chandler’s TV guide?” after stealing it for months. The answer was “Chanadler Bong,” inevitably leading them to a lighting round where Monica goes crazy and bets the apartment. She and Rachel of course lose, so Chandler and Joey move into the girls’ apartment. Then Chandler yells at Rachel and Monica by saying “You’re ruining moving day!” and Chandler and Joey rides in on his weird dog statue. OMG! I think of that moment every time I move or help someone else move. Cracks me right up people!

So many memories and so many amazing moments. Happy 20th anniversary Friends! It doesn’t feel that long ago when I would make sure I was home to watch the live episode. And I was faithful to you to end, even when the final two seasons were just okay. Anytime you want to have a marathon session, I’m down to reminisce. I’ll never forget my ‘Friends.’