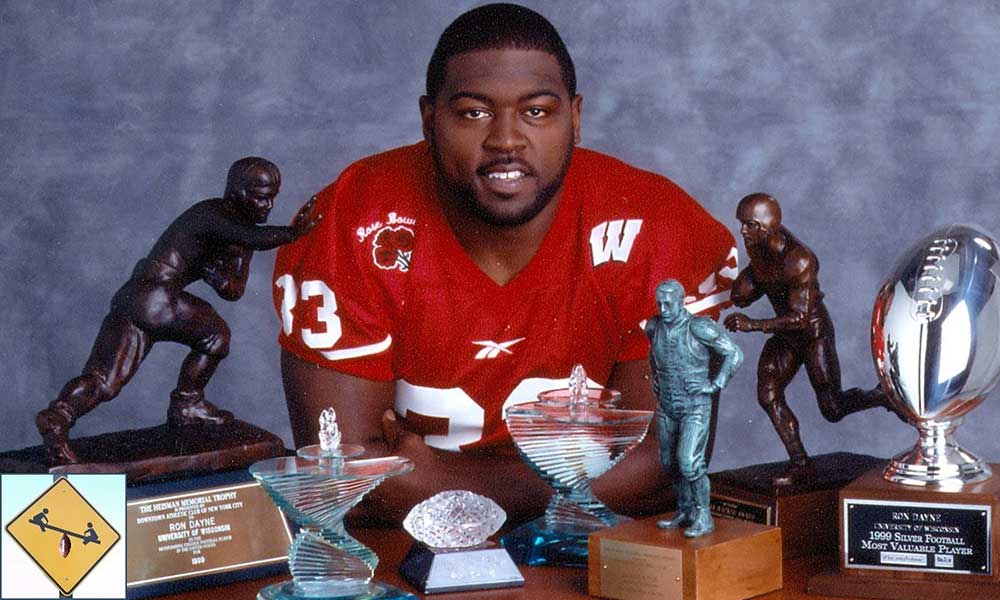 We have two college football leading rushers, because the NCAA anointed a new champ at the expense of another. Donnel Pumphrey was great, but Ron Dayne was still better. Right?

Over the weekend, a bunch of bowl games took place that no one cares about. Something interesting did happen in one of them though. As San Diego State defeated Houston in the Las Vegas Bowl, Aztec running back Donnel Pumphrey became the FBS’ all-time leading rusher.

That’s right, someone you have surely never heard of is the leading college rusher of all time. Well, sort of. I’ll let Ron Dayne take it from here. From his official Twitter account: “Congratulations young man #GOAT #7125.”

Dayne throws Pumphrey a little dap and then immediately crushes the kid back to earth. That is because Pumphrey’s all-time “record” is 6,405 yards, which includes his four seasons at SDSU, all regular seasons and bowl games. #7125 refers to Dayne’s rushing total from his four years at Wisconsin, only the NCAA doesn’t include his bowl yardage in its record books.

Interestingly, it is hard to locate Dayne’s rushing total sans bowl games. Every website includes the numbers, because, of course they do. We have the numbers and bowl numbers count. However, according to the NCAA, they only count after 2002.

In this decision, the NCAA takes a slippery-slope argument. There are not solid bowl figures dating back to the early 1900’s. That means we cannot use bowl data until they became “official” in 2002. There is a desire to not go back and change possible title-holders as well.

But Ron Dayne played in the late 1990’s, not the 1890’s. We DO have his bowl stats. I can’t even find a reliable statistics site that has his yardage totals without bowl games. I don’t know how the NCAA does it. Dayne seems to feel similarly, as he changed his Twitter profile to read: “NCAA All-Time Career Rushing Leader including bowl games #GOAT #7125yds.”

What say you? Obviously Pumphrey has had a tremendous career. Do you agree with the stance that bowl data should not count before it became NCAA official? There is also an argument to be made that bowl stats shouldn’t count for anyone, just as playoff stats are kept apart from the regular season numbers in the NFL. I could buy that. What I can’t buy is disregarding bowl stats from years where we have reliable figures because in more distant years we don’t. You want a natural cutoff? How about when the stats are no longer reliable and/or recorded? How about that as a cutoff?

If we were talking about any other organization, then perhaps I’d be surprised and push for change. But this is the NCAA, so what’s one more asinine declaration by an increasingly corrupt conglomerate? Ron Dayne has every reason to be pissed off. Pumphrey should be angry too. This is one situation that’s easily solved, but never will be.

Drawing a line in the sand for college football records makes sense in principle. To make that line the year 2002 is freaking ridiculous. What happened in 2002 that stood out to the “geniuses” at the NCAA? Was there a complete computer meltdown at the turn of the millennium requiring two years of fixing, making 2002 the first year where things made sense? I’m on board with making regular season stats separate from postseason statistics. I’m on board with keeping playoff era stats separate from the BCS and bowl-only eras. The best teams are playing an extra game now. Those are logical arguments of statistical separation, all be it with holes of their own.

Dayne collected the most rushing yards in NCAA history over the course of the games he played. He is college football’s leading rusher as far as I’m concerned. Yet the record books and record keepers are not fair, like many other “rules” and unwritten rules of sports. This puts Pumphrey at the top of the list of college football leading rushers… for now. His record is tarnished by the stupidity of those keeping them, but hopefully some good comes of this.

More Sports: Are Knicks, Bulls, and Grizzlies in Trouble at Midseason?


Hopefully Pumphrey parlays this controversy into a shot at the NFL or his next career. Ron Dayne found short-lived success at the next level. Perhaps he too can parlay this new publicity into something greater. What’s undebatable is the ridiculousness of anointing a champ at the expense of another who played within the last twenty years. We all know the numbers.