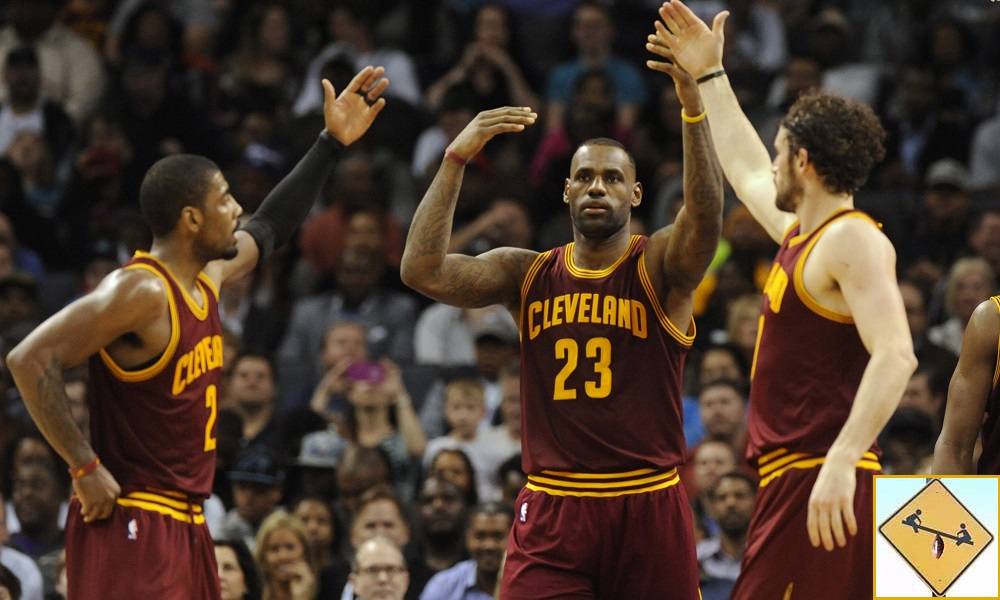 No one is playing quite like the Cleveland Cavaliers thus far in the NBA Playoffs. Are they the favorites to win the NBA title? Hell yes! (Photo Credit: Sam Sharpe-USA TODAY Sports)

Here is the most important question of the NBA playoffs. Should the Cleveland Cavaliers be the favorites to win the NBA title?

Prior to the postseason, the general consensus seemed to be Cleveland was one of the four best teams in the NBA. The other three (Golden State, San Antonio and Oklahoma City) where all in the Western Conference. Thus, if things traversed as planned, the Cavaliers would make the finals and face one of the other top teams in the league. To put a bow on this, Cleveland MAKING the finals would really not mean much. It wouldn’t be until it got there that we would know how good it was.

Cleveland is following script, on its way to making the finals out of the East, but the way it has gotten here has been crazy impressive. With a revamped rotation, essentially benching the prototypical big men in favor of Kevin Love – LeBron James frontline lineups, the Cavs have been hitting threes at a miraculous pace and generally running the rest of the conference off the floor. They swept round one; they swept round two; they absolutely demolished the first two games of the conference finals before succumbing to poor shooting and DeMar DeRozan in Game 3. So of course we should change our opinion. This team is way more dominant than we expected.

And yet, these Eastern teams are complete trash. How seriously can we take the numbers, even the 4-0 series victory numbers? Toronto is one of the worst conference finals teams in a while. It was lucky to get out of the first round against an Indiana team that simply could not score. Cleveland is doing everything it can but even perfect dominance does not mean anything when an opponent from the West (either the Warriors or Thunder) await for the championship.

Some folks were even saying this breeze through the East had been bad because the Cavaliers hadn’t faced a test. Somehow sweeping everything would work to their detriment more so than playing worse and losing a game or two. I’m not sure I buy into that argument. Dropping Game 3, even if it ends up not mattering in the course of the series, was not better than winning Game 3. But either way, even if the Cavs had gone up 3-0 on Toronto, I do still worry about how good this roster actually is.

If Cleveland plays OKC in the finals, the Cavs are my favorites to win. If they face GS though, I would give the edge to the Warriors even with how the Cavs have played. Going 12-1 through the East just wouldn’t mean enough in the scheme of this postseason.

The 2016 NBA Playoffs have been as close to chalk as humanly possible. Its sad really, after such an exciting final month of the regular season, to have the playoffs unravel as predicted. It was Cleveland, Golden State, Oklahoma City and San Antonio to start the year. A few other teams warranted noise, but in the end we got what we wanted. The best teams elevated themselves and are about to make the NBA Finals. So is Cleveland the favorite to win the NBA title? Hell yes they are!

The Raptors have some serious fight in them, but the Cavaliers are a better basketball team. They have impressed almost everyone with the way they’ve gelled, each player’s skills complimenting one another to perfection. I give a ton of credit to their coach and to the way LeBron James has found balance in his playing style. It took a full season of adversity for him to shed the monkey off his back and actually be able to rely on teammates again. Not that he couldn’t before, but James himself was playing as though he couldn’t. Now that’s gone and Cleveland has rolled.

The Cavaliers were playing for the NBA Finals all season and got overshadowed by the Warriors setting a new regular season wins streak. Yet Golden State always had the tougher road back and their ability to get there was never a lock in my book. San Antonio was nearly as great during the regular season. The Thunder finally got the band back together this season. Last year Durant and Westbrook battled injuries. This year might be their last time playing together in Oklahoma City and both are healthy, hungry, and aiming to prove themselves. Nothing about the West playoffs diminishes Cleveland’s shot at a title. In fact it does quite the opposite.

The Thunder eliminated the Spurs and no matter if OKC or the Warriors advance, the surviving team will be limping into the NBA Finals as compared to Cleveland. Toronto is no pushover, but the Cavs are winning this series and won’t have to go seven games to do it. Instead of clawing and fighting to return to the Finals, Cleveland has flexed its muscles and found a dominating rhythm. The same can’t be said of the Warriors or Thunder. That series is the battle I expected it to be. Great players leading great teams.

One more thing makes Cleveland the favorite to win it all. While Golden State and OKC each have two dominating players that stand above the rest, the Cavaliers have three. That’s math and math doesn’t lie. The Cavaliers are rightfully NBA Finals favorites.