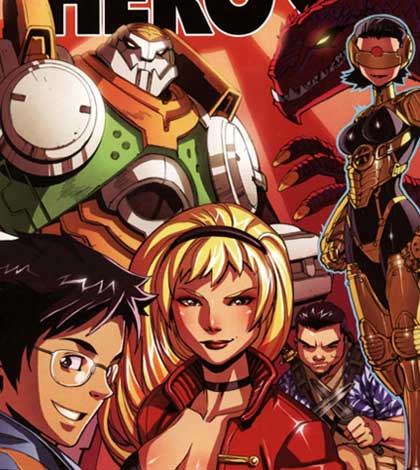 You may have noticed that since Disney purchased Marvel, there really has not been much cross-over. Technically, The Avengers was a Disney release, but it didn’t deter from any plans Marvel already had in place. But over the summer, Disney announced they intended to adapt a Marvel title into an animated family film. And few people seemed to notice, because nobody had heard of the title.

So let me clue you in to picking up Disney’s next big thing before anybody else notices. Marvel actually put together a reasonably priced collection and released it a little over a month ago, and again, nobody seemed to notice. Here it is: Big Hero 6. They’re a team of teen-agers with super powers, working for the Japanese government to fight off giant monsters and whatever else might threaten the island nation. But mostly, they’re about having fun.

Subtitled “Brave New Heroes,” the $8.99 book collects a mini-series by legendary X-Men writer Chris Claremont and artist David Nakayama. Drawn in homage to manga style, the book is bright, colorful and appropriate for most kids. Though Marvel rated it “T,” that seems to be mostly because  two of the heroes, Honey Lemon and Go-Go Tomago, like to dress in a Loli-goth fashion.

And oh, yes, all the heroes have names that are just silly but ripe for movie posters and figurines. In addition to those two, there is the boy genius Hiro, his robot Baymax and the sushi-chef who can generate plasma weapons, Wasabi No-Ginger. Somewhere in there, too, is a young American football coach who can become a dragon. They call him Fred.

The story brings them to middle America, where the Japanese teens struggle to keep a low-profile while protecting a scientist and his daughter. They also have their own government liaison keeping watch, the aptly named “Furi.” Like Nick Fury, she has lost an eye, but replaced it with a cybernetic one. Kids will get the joke, but move on quickly to the fast-paced action.

After reading this, it’s a no-brainer for a Disney movie. Though originally the team appeared in conjunction with Sunfire of the X-Men, this book keeps the concept completely separate, ready for the big screen.

Get it now so that you’ll be ahead of the curve when Disney launches their marketing onslaught in a year or two. Big Hero 6 will be their next big thing.