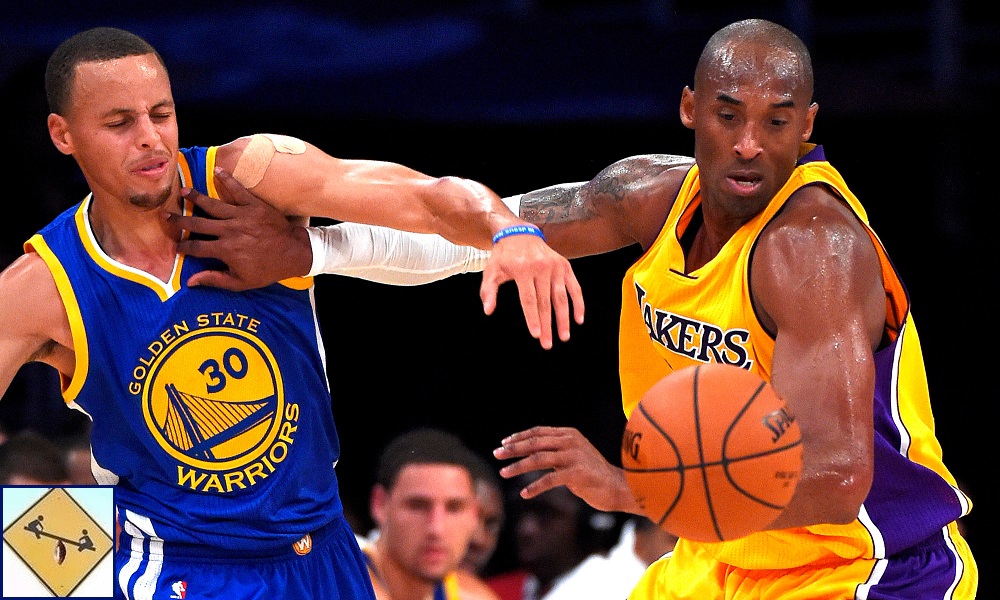 The NBA season concluded with actual excitement! When does that EVER happen? Plus tanking, sucking and history. 2016 NBA Season in review.

Now that the season is officially, completely over, the NBA postseason matchups are set in stone. What a crazy final day of the regular season it was! First, as you mentioned earlier in the week, there would be Kobe business. The Lakers’ final game never registered on my radar other than the fact that the Jazz might have a chance of making it into the playoffs with a win over LA. The Kobe factor, in my mind, was nothing beyond him probably shooting the Lakers out of that game and giving the Jazz the best chance to win.

That I guess kind of happened…? It didn’t much matter since Utah had already been eliminated by the time its game tipped, but Kobe Bryant shot the ball 50 times! 50! I didn’t know that was even allowed! He scored 60 points in his final ever NBA game, which says that this game was absolutely ridiculous. Can it even be considered a real basketball game if only one player out of the 10 on the court is even trying?

And it overshadowed the fact that Golden State broke the record for most wins in a season, probably because everyone assumed it would easily vanquish Memphis, which it did. Just a crazy final day, and that’s not even addressing the Eastern Conference, where four teams finished with identical 48-34 records. By the look of the standings, Miami won all the tiebreakers, followed by Atlanta, Boston and then Charlotte. Don’t ask me how. What it means is Boston and Charlotte have to play the other two respectively without home-court advantage. Other than that, the whole quartet is on its own.

Out West, the Houston Rockets did squeak into the playoffs, knocking out the aforementioned Jazz. Houston’s reward is facing the 73-9 Warriors. So, you know. Memphis has no chance against San Antonio in that first-round matchup either. What a devastating collapse for the Grizzlies down the stretch of the season because of all those injuries. The only excitement is in four or five potential shootouts between the Los Angeles Clippers and the Portland Trail Blazers. I’m not sure any West series goes beyond five games.

Outside of the playoff picture, I think Utah may actually benefit from missing the playoffs by one game. Instead of getting swept by Golden State in the first round, the Jazz get a top-12 pick in the lottery since a couple of East teams finished with better records. And what do you make of the lottery chances of Philadelphia getting two top-five picks since it owns the Lakers’ top-three protected selection? With the way the first round of the postseason ended up, the lottery seems way more interesting to me at this point.

It would be fascinating if, immediately after Sam Hinkie steps down as leader of the 76ers’ front office, the team’s plan hits and it gets two top-five draft selections. And then what if Joel Embiid is healthy and Dario Saric comes over from Europe? This team will be loaded! The possibilities are dizzying…and Hinkie gets none of the benefit because they forced him out. Why the general consensus seems to be that the multi-year tank job was all Hinkie’s idea (and thus all his fault) and not an organizational strategy is still a bit perplexing.

This is the first NBA season in a long time where the final week was actually exciting. The combination of Golden State going for the all-time wins record and facing the Spurs twice in one weekend in order to get it, along with Kobe Bryant retiring, made for a thrilling end to an otherwise predictable regular season.

The fact that the Eastern Conference as a whole was more competitive than the West truly surprised me. The Western Conference certainly has all but one of the top five teams in the league, but the drop off was staggering this season. Despite all of the strong showings in the East, nothing about the final standings is worthy of debate. Every team we expected to make the playoffs has done so. Instead I’ll focus on a few key disappointments.

I really thought Anthony Davis and the Pelicans would take a step forward this season. The same with Carmelo Anthony and the Knicks. New York was interesting and fun all year because of its rookie of the year candidate, but both teams stunk up the basketball court. Fortunately we had plenty of excitement among the league’s elite.

Golden State managed to get better, overshadowing incredible seasons by San Antonio and Los Angeles. We expected the Cavaliers and OKC to be dominant, but LA managed to keep winning despite losing one of its best players for much of the year. Blake Griffin missed a lot of time, but the team never missed a beat. The Spurs were almost as good as the Warriors, but wow. Golden State just rolled. I’m not sure anyone can stop them on their way to another championship.

This time of year is usually a snooze fest in the NBA. We know who’s good and who’s in the playoffs. The fight for final seeds is inconsequential, because those teams are not winning in round one. Round one itself is guaranteed to be all chalk, outside of one or two matchups. So what do we get excited for? Well in 2016 I can proudly say the NBA was interesting to close out the year. There was actual excitement and I can’t wait for playoff basketball!