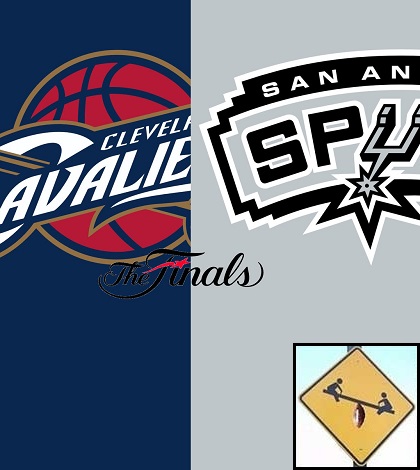 Is a 2015 NBA Finals rematch between LeBron James and the Spurs inevitable?

Is there anyone who can possibly unseat the pending San Antonio Spurs versus LeBron James and co. 2015 NBA Finals rematch? The uniform in the East may have changed, but the favorite remains the same.

Some folks are attempting to flip the script and get ahead of the curve by pointing to the Cavaliers’ slow and sluggish start as evidence that they won’t be there at the end. I’m not buying it, especially just a few games in. I don’t care what any team’s record is right now, the first week of November. The tallies are irrelevant to me and to the playoffs for that matter.

Maybe Detroit starting out the year winless in three attempts (before winning in try number four) means the Pistons won’t make the playoffs, but who cares? I thought they’d get in but as nothing more than a sixth, seventh or eighth seed. The only exception to these meaningless early results is, of course, the Oklahoma City Thunder. We already talked about it, so I won’t harp on it, but the Thunder are doomed. It appears as though they are going to be so, so bad while Durant and Westbrook are out that even if both guys come back within the five-week estimate, it will probably be too late for them to make the playoffs.

That’s really the only change I can see from preseason playoff prognostications to now. Everyone else will still be there at the end.

As for upending a “rematch,” I really like Golden State as a title contender. I really dislike both Houston and Memphis as title teams, the two teams with the best record in the league right now. In the East, Charlotte and Chicago can be interesting if they get their offenses ironed out, especially since Cleveland will probably have a poor defense all year long, regardless of continuity. When two of your three best players are minus defenders, it’s hard to get stops. That said, it’s still the Cavs here, right? I’m not buying Washington’s chances this season.

Three NBA teams are undefeated and two remain winless. The rest currently occupy a mishmash of results that have yet to formulate into any kind of league picture. Yet it’s almost comical how little that team dominance has changed over the last two years and into this new NBA season.

Injuries certainly change things and this year the Thunder have fallen victim. Yet I’m sorry, it is way too early to count them out. I think they have an uphill battle, but if any team can make up a ten game deficit against the likes of Dallas, Phoenix, and New Orleans to snag a playoff berth, its OKC. Kevin Durant and Russell Westbrook are that good.

As for challengers to the Spurs vs LeBron James 2015 NBA Finals rematch that everyone expects to happen, there are actually quite a few. Let me start in the Western Conference, where San Antonio is one injury away from losing everything. I know they perfected the process of playing their veterans limited minutes, but those veterans are still the core of this basketball team. With OKC on IR, it’s the Warriors and LA Clippers who pose the biggest threat.

You casually passed over the Clippers, but both LA and Golden State have proven themselves serious contenders. Doc Rivers is still the Clippers coach and I expect even greater improvement in year two. As for Golden State, that team is scary. I don’t know any other way to put it, but with young legs and playoff experience, they are definitely a major threat in the west. No other Western Conference team deserves mention as of yet. They all have serious handicaps that the Spurs can easily exploit.

Back east things get murky, as I’m not convinced LeBron James is on a team that is yet built for title contention. Maybe its the stink of Cleveland’s past woes, or the lack of playoff experience outside of LeBron, but if they can’t play good defense then its unlikely they win the title, let alone get out of the Eastern Conference.

That being said, the east offers up little evidence to anyone unseating LeBron atop his throne. It’s the Chicago Bulls and Miami Heat who pose real threats. Include the Knicks if you want, but they don’t play much defense either. Derrick Rose will hopefully be okay enough to play the majority of this season. That alone should be a spark for Chicago, but not enough to get back LeBron and the Cavs.

I expect a Cleveland vs Miami Eastern Conference Finals, simply because Dwayne Wade is that good as well. He must stay healthy, but has extra motivation to do so this season. The NBA is often predictable and with the star players in very specific spots, don’t expect something crazy to happen. Now if Rajon Rondo gets traded from Boston to anyone, that could shift the balance of power. Until then, I’m picking all chalk.

[If you missed Part one – Early injuries cause NBA upheaval]

Photo and Logos courtesy of www.deviantart.com, www.mysanantonio.com, and the NBA