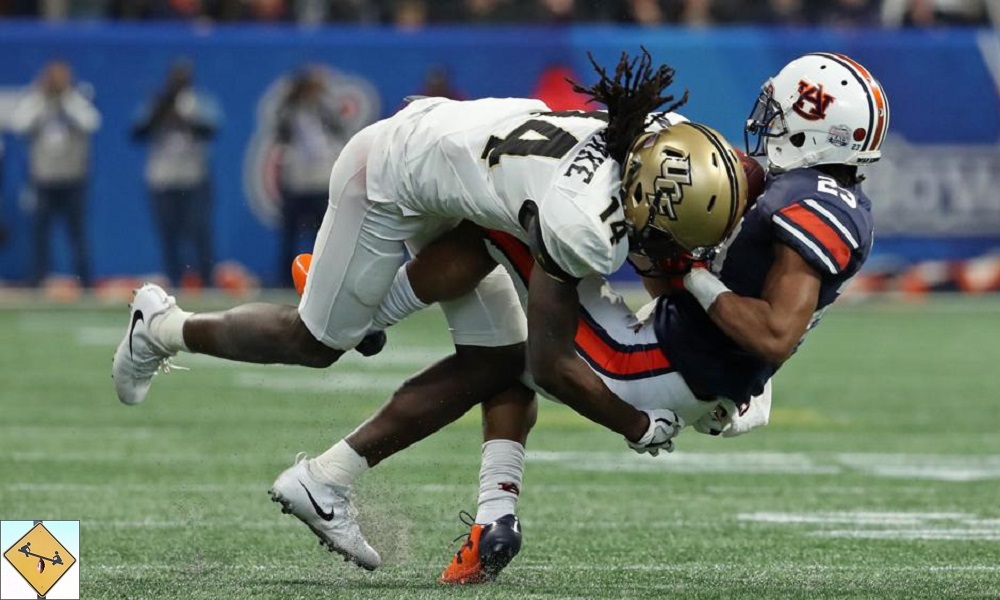 The UCF Knights claimed the 2018 College Football Championship, an old practice made new by this year’s lone undefeated team. They are the REAL champions.

A fun story came out this week after the college football New Year’s day bowl games were played. Between the College Football Playoff national semifinals and the championship game scheduled for Monday, a national champion was named.

The UCF Knights, owners of a perfect 13-0 record, decided they would be national champions this year after their Peach Bowl win over the Auburn Tigers. The school announced it would raise a banner claiming as much, as well as hold a parade for the festivities. It changed its Twitter handle to “2017 National Champions.” The program would also be speaking with its wallet, paying out bonuses to its coaching staff for contractual monetary awards for a title.

ALSO ON BUZZCHOMP: NHL has Multiple Worst to First Teams

Here is a lengthy but important quote from UCF athletic director Danny White:

“If you take the long view of the history of college football, there’s an awful lot of national championships being claimed by universities that didn’t accomplish what we accomplished this year in those respective seasons, so we feel we’re more than justified to claim our first national championship, and we think it’ll be the first of many. I don’t think our kids should be penalized because we weren’t respected by the College Football Playoff committee… We’re trying to build our program, and we feel very strongly as the only undefeated team and having beat Auburn, who beat both teams competing for the national championship, that we have an extremely sound case to claim the crown.” (Bold inflection is mine.)

First off, this is all awesome. Claiming erroneous national championships just for the sake of it is awesome. UCF’s case is also awesome. The Knights are the only undefeated team in the country. They had the best offense in the nation. They took down Auburn, the team that vanquished both title game participants. The only small factor going against them is that they didn’t, in fact, win the national championship. But other than that!

The not-so-secret history of college football is littered with claims of national titles, so this is nothing new. It’s just new to this generation. Ever since BCS and playoff games were instituted to definitively crown a champion, no one has had the balls to ignore said rulings, until now. I say kudos to Central Florida. This means nothing to anyone, but it’s still fun as heck to take a stab at upsetting the apple cart.

This is beyond awesome! I had no idea that it was common practice in the past for teams to ‘claim’ the national championship without actually winning it. The idea makes sense, especially since an actual championship game was not held for much of college football’s history. Therefore, a team ‘claims’ the title and if no one rebukes the claim, they are champions. This rules!

Unfortunately for the UCF Knights, either Alabama or Georgia is going to rebuke and you know, win the actual championship game that everyone agreed in advance would crown our champion. They even have a super cool trophy for the winner of that game. But this begs the question, who is the College Football Playoff (CFP) actually helping? It’s intended to qualify the top four teams into a playoff for the championship. Yet the only undefeated team in college football was excluded. The UCF Knights could not have done any better this past season, and literally no other team had a better year. Everyone else lost at least once.

The CFP is not doing any more for smaller schools than the BCS, or the previous system without a title game. In fact, the previous system would help the UCF Knights in this instance. They claim the championship, then Alabama stakes its claim. Perhaps Georgia puts its own hat into the ring. Then a committee is formed to size up the schools who all named themselves champion. Except that only one school is undefeated, so they win. There is no debate. UCF did not lose.

I can’t argue with the UCF Knights’ logic and I love that the school is actually going to celebrate their championship. UCF defeated Auburn, who was nearly on top of college football after defeating then number one ranked Alabama. Auburn beat Georgia, but also lost to them in the SEC title game. The logic has always gone, if you beat a team that defeated another team, then you yourself are ahead of that other team because they lost to the team you defeated. Its been a practical tenant of college football. UCF is therefore ahead of Alabama. If the Crimson Tide beat Georgia, this puts the Knights firmly ahead of them too. Otherwise its more grey, but still! The CFP needs expansion to six or eight teams. It must include any team that is undefeated, no matter how small their conference.