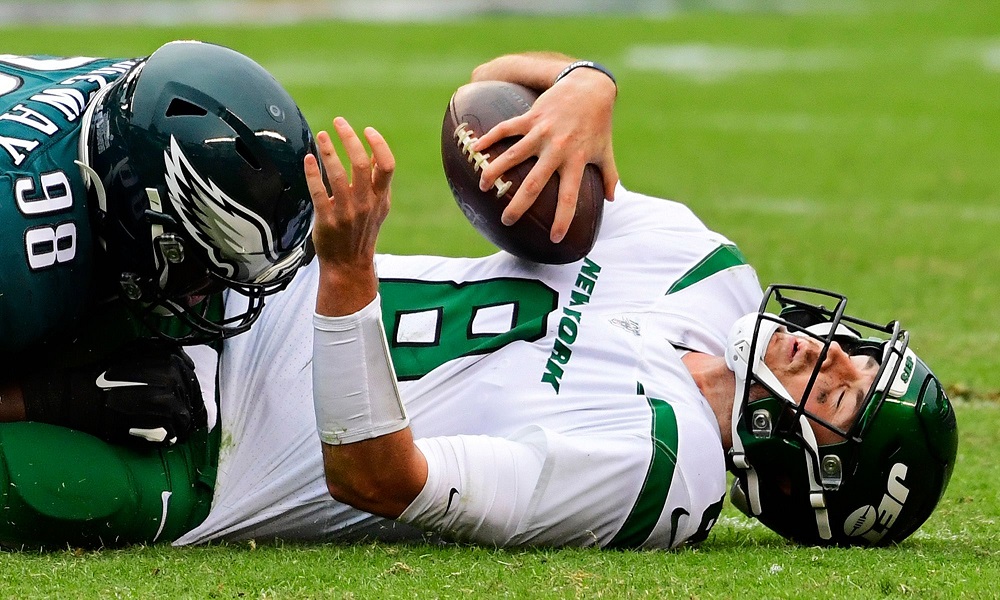 Its hard to imagine the extent of misery that has befallen the New York Jets. Yet the team keeps finding new ways to look bad. Here it comes.

The New York Jets told us they were going to make changes coming out of the bye week.  Adam Gase told us that things would look different after the beat down by the New England Patriots.  He promised a better, more complete offense.  Well folks, either Gase lied to us, or quite simply he doesn’t know what the hell he is doing.

Sunday’s trouncing by the Philadelphia Eagles was hard to watch.  This organization planned to have Sam Darnold back as their starter, despite little indication he would be cleared in time. Darnold wasn’t cleared and the Jets had to scramble and put poor Luke Falk into the slaughter.  This is just another clear sign that coach Gase doesn’t have a clue as to what he is doing. New York keeps finding new ways to look bad.

Falk was sacked nine times by Philadelphia.  NINE TIMES! The Eagles have one of the worst front four on defense in all of football. They generated only three sacks all season before playing the Jets, then made New York look like a high school team. Philadelphia beat them to the outside and inside all game.  Falk looked awful, having no time to throw.  He is inexperienced and held the ball too long, so maybe put your quarterback in shotgun once in awhile. Perhaps its a good idea to generate a little more time for him to throw.  If I were Darnold, I would not be looking forward to playing with this offensive line.

It’s clear that the only player on offense who can do anything by himself is Le’Veon Bell.  He is constantly on the field and gets the ball basically every snap.  This is a major problem. Bell touched the ball 22 times on Sunday, but only generated 88 total yards.  You think the defense knew what was coming? The rest of New York’s offensive players were nowhere to be found.  It was another great offensive game plan by Coach Gase.

Also on BuzzChomp: Zombieland Double Tap is Must See

The Jets defense and special teams continue to improve and certainly seem like they are trying.  At times on Sunday, New York’s defense looked really good.  They were able to hold the Eagles to reasonable gains, and 14 of the Eagles 31 points were scored off of turnovers.  The problem is that the offense is really bad and this is our head coach’s specialty.  Players held a private meeting on Monday to discuss the mess. To be a fly on the wall in that one.  Cue the violin.

The trajectory of the New York Jets is headed towards disaster, but perhaps the return of Darnold and TE Chris Herndon will change things. If not, this team will become the sh*t storm they usually are, with Gase potentially fired mid-season.

Next up are the Dallas Cowboys, who are salivating after two disappointing losses.  I foresee this working out well for the Cowboys.  The only hope for New York is the return of Darnold and Herndon.  I’m crossing my fingers, but not holding my breath.  Dak Prescott will put up good numbers and Ezekiel Elliott will have his way. Dallas 31 – Jets 13