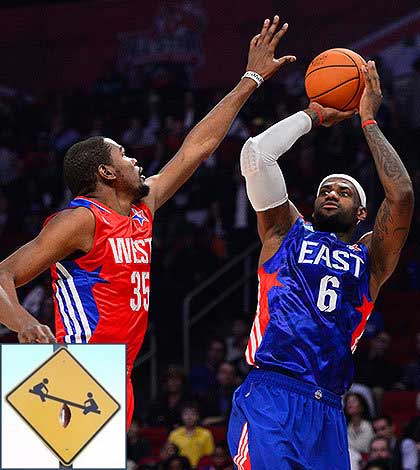 The reason the high-dunk competition was self-explanatory was because it was simpler than you made it. The entire event was just to see who could jump the highest. The inference was that there would be no “moves” performed. A player would just have to stuff the ball through the rim as the rim was continually raised higher and higher. Could LeBron dunk on a 14′ rim? That’s where the interest would be generated. And to be honest, I’m interested in that. I think it would be fascinating, albeit perhaps not great television.

H.O.R.S.E. is the same idea. I want to see the competition in its entirety, but the possibility of endless misses makes it hard to envision on TV. But I’m getting ahead of myself. It was your job to list the likelihood of each of these additions. So I’ll leave that to you.

Let me just say though that the two-on-two or three-on-three games have to be all NBA players. It won’t work with WNBA players or celebs. That mixture already exists in the celebrity game where famous people run the court with current WNBA stars and former NBA stars. The game is only entertaining because the professionals don’t try very hard. If they did, it would be a shit show.

The results would be even worse in a three-on-three environment. The only iteration of this that would work for me is if you removed the NBA guys entirely. I like the idea of seeing how good WNBA players are compared to reasonably athletic male adults. But why even bother at that point?

Speaking of why even bother, I found a couple more incredibly intriguing ideas that would probably not work under any circumstances. However, I found them to be some of the most creative tweaks to All-Star weekend.

The first is to make the game matter, like really MATTER. The idea is that the losers of the All-Star game become ineligible for next year’s game. So if anyone wants to make two straight All-Star appearances, they better win the first one!

Of course, there are too many holes in this idea. The most obvious being what to do with injured guys. Everyone would make the game and then opt out for various reasons to avoid actually losing. Also, it may result in a self-fulfilling prophecy where, say the East loses. So next year, all the guys on that East squad are ineligible and suddenly the 2015 Eastern Conference All-Stars aren’t a very good team. They would probably lose again until that first set of guys are eligible again in 2016.

It’s a silly idea for sure. Although, it would make the game that first year the rule was instituted the best All-Star game ever probably.

The other idea I came across is a little less silly and a little more likely. I’d be interested to see where you would rank it in your list of probable switches.

For the dunk contest, rather than team events or even the old way where everyone did three or four rounds of individual dunks, in this new scenario, everyone does the same dunk for the first few rounds. Judges vote on who performed the specific dunk the best: comparing apples to apples. Then, for the finals, each player can unleash their own dunk to win the title.

Not only does it remove the problem of players having to come up with four and five interesting dunks for one competition, but it also would allow us to compare dunkers on merits of how they perform certain moves. Sounds like a win-win to me.

Your new dunk contest idea sounds vaguely similar to mine in which the players have three or four dunks to pick from. I guess great minds think alike, or we both just love the dunk competition and want some real excitement back in the action. I’ll start my rankings right here with a revamped dunk competition. I hesitate to call this a likelihood ranking, mainly because its a stupid name, but nevertheless, here we go.

Most Likely NBA All-Star weekend change: Revamp the dunk contest (again)
They seem to change or tweak the dunk competition every year now. I’d like to formally announce my desire for a committee to preside over dunk competition changes. I liked the addition of playing for charity this year, but did not care for the team concept. Since we suggested a few changes and I can think of several more, lets break it down. We are about to head into a ranking within a ranking.

Dunk contest changes (most to least likely):
– Have both an individual and team dunk competition (Seems like a no brainer for the best part of All-Star weekend)
– Make players perform the same dunk in each round (Dunks get harder as rounds go later, perhaps add a wildcard)
– Todd’s simple High Dunk competition (I’d love to see them add this, but it might be too progressive for the NBA)
– My super cool High Dunk contest where players perform a cool/unique dunk as the rim goes higher with each successive round (Anybody in the NBA listening? Anybody?)

Medium Likelihood of change: Half Court shoot-off
Another no brainer in which even LeBron James would participate. Its also a built in McDonald’s commercial waiting to happen.

Getting less likely: HORSE competition
This could get ugly with too many missed shots, but we are talking about NBA players here. I actually think the issue would be that no one would be missing much of anything. So they would have to outline a baseline difficulty for shots to increase the misses and end rounds faster.

Mostly wishful thinking: 2on2 competition
If All-Star weekend is supposed to be no pressure fun for the players, then we are now entering territory which is the exact opposite. Talk about pressure for bragging rights.

Doubtful: 1on1 competition
Same reason as above, ten-fold.

Least Likely: A tie between my 3on3 competition and the idea that players get eliminated from next season’s game if they lose
Both ideas are unrealistic, but the elimination idea is assuming that every player will even make next season’s All-Star game. It would also completely ruin the record books from now on.

[If you missed Part one – NBA All-Star Weekend Unraveled]