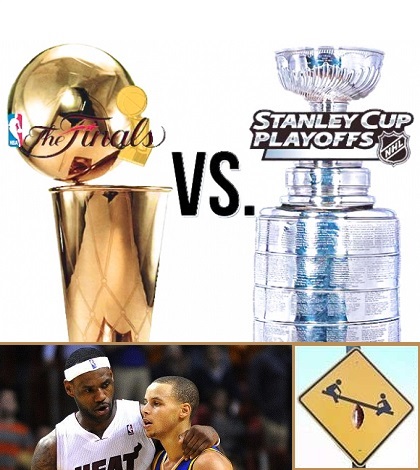 It might be a week before the NBA Finals 2015 get going, but that doesn’t make LeBron James vs. Stephen Curry any less exciting! The layover paves the way for some great NHL playoff action. Hockey has all the drama with two game sevens, but the NBA Finals has the super stars. Does the NHL finally trump the NBA?

It didn’t take long to confirm our NBA Finals matchup of Cleveland versus Golden State. We were spot on in our Finals Pre-preview.

The Cavs looked awfully impressive in closing out Atlanta, and it was a welcome relief to see Kyrie Irving get some game action prior to the season’s final series. I’m still not convinced the Cavaliers have enough to hang with the Warriors for seven games, but a (reasonably) healthy Irving at least means it won’t be a cake walk.

It’s been an odd juxtaposition this spring between the NBA playoffs and the concurrently running NHL playoffs. In basketball, we almost always get the favorites in the end and often the path there isn’t overly exciting. With the exception of the Clippers – Spurs round-one series out west, that was again the case this season.

Meanwhile, in hockey land, the normal level of Stanley-Cup playoff hysteria seems to have been kicked up another notch. Both conference finals went to seven games and have been bonkers. Tampa Bay’s Ben Bishop looked like the best goalie in hockey, until New York hung 12 goals on him in its last two wins. And this came from a Rangers offense that had been struggling with scoring at all.

A case could have been made for Anaheim’s Frederik Andersen as the playoffs’ best goalie as well, until Chicago started peppering him around game four. The Ducks still made it all the way to game six of the Western Conference Finals though before they lost a regulation game in the postseason. That included the triple-overtime insanity of game two and the double-overtime defeat in game four.

With the NBA playoffs seeming a bit lackluster this year (thanks mostly to the slog that was the entire Eastern Conference), the Stanley Cup Playoffs have been a nice reprieve. I know the masses and the media never turn to hockey, but the diehards continue to squawk about the hockey playoffs being the best product of any professional sport.

Year after year, it’s hard to argue with that.

The hockey playoffs are certainly exciting, yet I can’t claim to have witnessed much of the drama. I won’t argue with the insanity because its real. But like the majority of the sports masses, I do not regularly tune in for the NHL playoffs. You are my primary hockey connoisseur, so I will defer to your excitement. Game sevens baby!

On the flip side, I’m super stoked for the NBA Finals. Despite the other playoff rounds being rather uneventful year after year after year, the NBA Finals are simply magic. Maybe its the fact that LeBron James has been playing in the ultimate series for five seasons in a row now. Or maybe it’s that the two best teams from each conference almost always make it.

Either way, this NBA Finals has me all pumped up. LeBron James ditches his boys in Miami to return home to a sorry sack sports city, only to bring his Cleveland Cavaliers to the NBA Finals as expected. Cleveland is in desperate need of a championship.

Stephen Curry, the new electric MVP of the league, leads his team throw a gauntlet of powerful basketball teams in the Western Conference with ease. They barely blinked an eye and now the Golden State Warriors are in the NBA Finals for the first time since 1975. That is forty years. The Warriors are in desperate need of a championship.

Add in two rookie head coaches and a plethora of other super stars and it’s almost laughable that we have to wait a week for this series to get started. That’s great news for hockey and the two Game 7 matchups this weekend. It’s also great news for press conferences. I for one hope Curry’s daughter makes one more appearance before Game 1 kicks off.