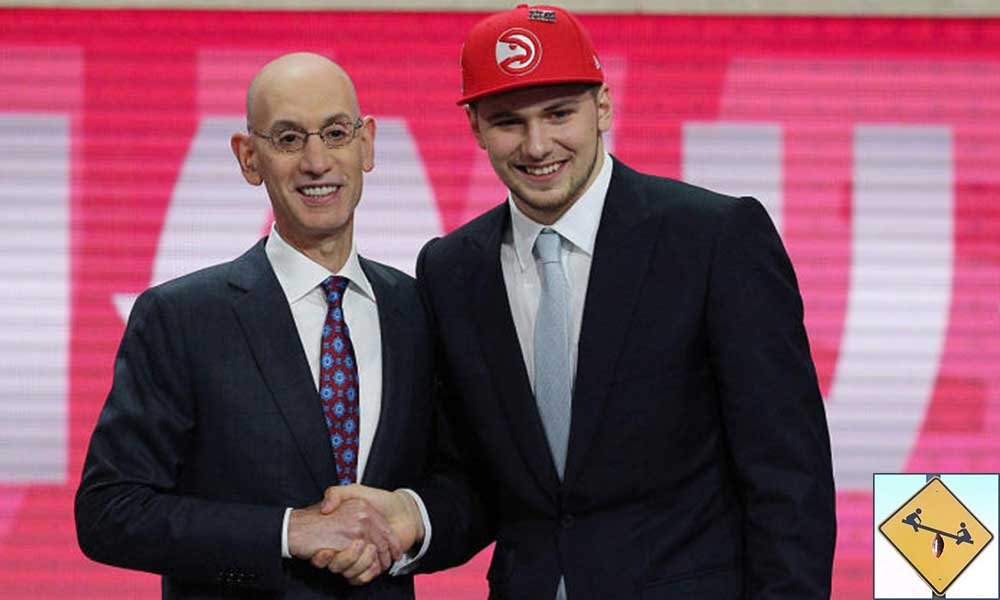 The most important draft of all the major sports is also the most ridiculous. The NBA Draft must change, because trading actual draft picks makes too much sense. This format makes none.

As expected, the real-life NBA Draft participants did not line up perfectly with our outlined archetypes. The Tweener Big and The Heaver ended up going much earlier than I would have taken them, though not earlier than expected for the players they represented. You were much more in-line with The Injury Risk than I was. Apparently, NBA franchises continue to be risk averse through to the end of the lottery. The draft lacked pizzazz, though, because no veterans were dealt during the proceedings. And only a couple “major” swaps took place throughout the night. Lessening the import, each swap contained players selected just a few spots apart. One team missed the guy it wanted, so it swapped and threw in an extra asset. Ho hum.

The outcome of this swapping, though, was something inane that happens every year. Every single year of the NBA Draft, trades are agreed upon during the event, yet they cannot be officially confirmed until the league reviews the necessary information. Because of the ridiculously convoluted deadline restrictions and salary rules of the league, it is necessary to do so, but it also results in the single dumbest running storyline. The deadline to trade draft picks is actually 2 PM the day of the draft. So once the draft starts, picks cannot be traded, and teams are forced to draft actual players and then swap their rights.

MORE BUZZCHOMP: Westworld Revealed the Forge and Its Nuts!

Players will be drafted by a team and given that team’s cap to wear, even though everyone knows that their rights were dealt to another squad. Luka Doncic went to the stage and interview with his Atlanta Hawks hat. The interviewer immediately asked him about his talks and relationship with the Dallas Mavericks, the team that acquired him. As he sat in his Hawks gear, he told the audience how he had lots of talks with Dallas and felt a connection to the organization, or some such nonsense. Then he left the interview, still in Hawks gear, and went through an entire media circus.

Two picks later, the Dallas Mavericks selected Trae Young for Atlanta. Young wore his Mavericks hat as we ran through the stupidity once more. Then it happened again with Shai Gilgeous-Alexander and Miles Bridges. I’m not sure if the entire scenario would be better or worse if the players didn’t know they were already traded. Mikal Bridges experienced that after being drafted by his hometown 76ers and being dealt to Phoenix a little later. But either way, it is something that makes me think less of the draft every season. It makes the event feel amateurish. Am I alone in this thinking? Why is the deadline before the draft? Why is the NBA the only sport that cannot allow trades to go through when they are agreed upon? As far as I can tell, no draft trade involving a swap of players has ever been denied, so why keep up the charade? I don’t even know a situation where one of these types of deals could be overturned.

The NBA Draft is technically the most important draft of any of the professional sports. The players coming in have the largest impact and are expected to produce from day one. So why make the thing seem like it was being executed by a bumbling event coordinator? And this doesn’t even get into reporters spoiling the event they are covering by releasing the draft picks right before the announcements. The league made a proclamation that journalists should not announce picks before they happened. Adrian Wojnarowski acted like a real jackass to circumvent the ruling, and it makes for one more piece of childish goings-on during the NBA Draft.

It never really occurred to me how ridiculous the NBA Draft actually is, but you are certainly correct in your assessment. Adrian Wojnarowski must agree as well, because spoiling teams’ picks consistently throughout the evening would otherwise seem juvenile. Why destroy the only moment that matters? He was hardly stealing the spotlight, so it was certainly pointing towards the larger shenanigans transpiring.

I’m going to set aside the specificity of a 2PM deadline for trading draft picks, because I cannot think of a single logical reason for such a deadline to exist in the first place, let alone persist. The NBA Draft is about to change, because the league finally updated the ‘lottery’ system. This was the final year under the old rules. Yet changing this deadline seems obvious and necessary. It also made me wonder about a fallout scenario that never seems to happen, yet easily could have. Let’s use your first example of Doncic in a Hawks’ hat, despite knowing he was acquired by Dallas. Doncic was selected by Atlanta, yet he was not officially traded until two picks later. Something could have gone wrong!

What if Atlanta got a better offer from the team drafting ahead of Dallas after they selected Doncic, but before Dallas got to pick Young for them? Has this ever happened? It seems logical that if you can’t trade your picks, then you agree in principle to trade the players you agree to draft. What if Dallas was unable to select Young because the team ahead of them drafted him instead? Then Atlanta no longer gets the player they wanted for Doncic. Do they still want to make the trade? He already interviewed in his Hawks’ hat and discussed playing for the Mavericks. What now?

The mere fact that such a stupid set of events could happen means that a change to the rules regarding trading picks must happen. During the NFL Draft teams routinely trade draft picks. Sometimes those trades involve other players, money, or more draft picks. The league approves them prior to the deal going down, then players get selected by the actual team they will be playing for. Now imagine you’re a player in the NBA draft. You’ve been looking forward to getting drafted your entire life and will likely frame the photo of yourself on stage wearing your team’s new hat. Yet the hat you are wearing does not represent your new team!

ALSO ON BUZZCHOMP: The Best Whole Bean Coffee Is At Whole Foods

The only way that this NBA Draft rule makes sense is if each team told the league in advance what players they were going to draft. Then Atlanta knows Young will be going to Dallas, so agreeing to swap presents no issue. Trading draft picks doesn’t matter, because teams just deal the players themselves and there are more concrete rules for doing so. Plus, I can also envision how a few people believe this adds more drama and excitement to the evening. It doesn’t, but I can see how a closed-door meeting may have deduced it would. Considering how predictable the actual regular season and playoffs have become, perhaps the NBA Draft is no different. The league is told in advance by each team who will be taken and no one changes their mind. This seems ridiculous, almost as ridiculous as a 2PM deadline to trade draft picks in the first place.