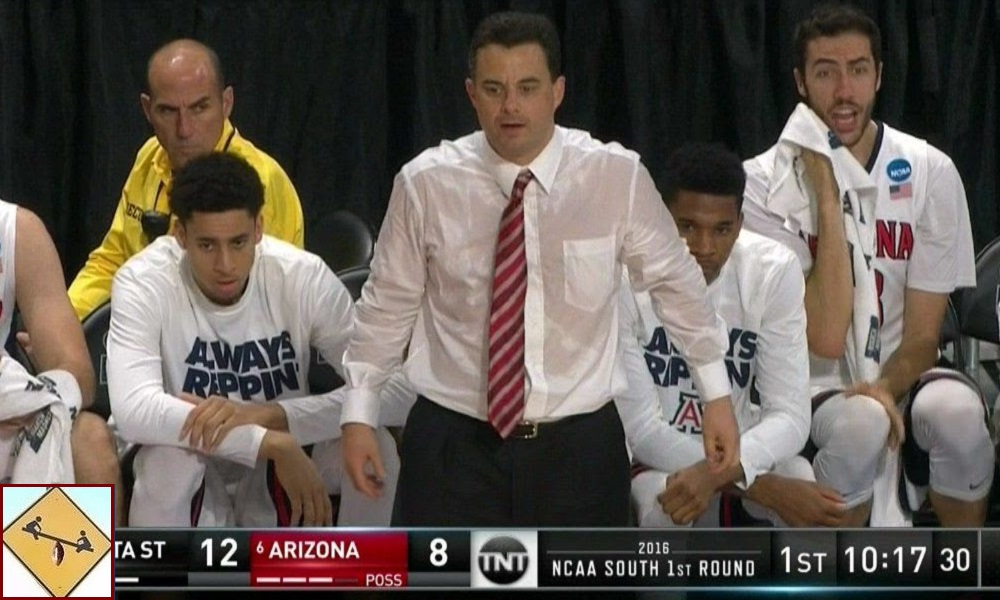 The greatest moment from March Madness 2016 didn’t happen on the court, but on the sidelines! Arizona’s head coach proved himself the sweatiest man in the history of athletics, so what the hell happened? Ladies and gentlemen, your 2016 Sweaty Coach of the year, Mr. Sean Miller!

This happened in the first round of the NCAA Tournament a few days ago. It is Arizona head coach Sean Miller “wearing a shirt.” I put the latter in quotations because he isn’t so much wearing his shirt as he’s absorbing it.

Have you ever seen anyone sweat this much? Does it imply he’s a great coach because of how into the game he is? Does the fact that Arizona got bounced in its first game change your mind about the previous answer?

ALSO ON BUZZCHOMP: 2016 Name of the Year Bracket Breakdown

More importantly, what should Miller do in the future to avoid such a situation? I suggest wearing something that wicks. Maybe he should be the first head coach to roam the sidelines as if he’s going hiking in early summer. Or do you like this as a marketing opportunity? Miller can be The Sweaty Coach.

Words can not describe how incredibly horrified and giddy I am for this moment in NCAA tournament history. Being the inaugural ‘Sweaty Coach’ is an honor and disgrace that Sean Miller won’t easily live down. We thought that March Madness 2016 would be remembered for its insane first round of games, but we were wrong. After round two was nearly all chalk, this year’s NCAA tournament is about Arizona and its very Sweaty Coach.

I’d like to just put it out there, but Sweaty Coach could have easily avoided this mess. Why no undershirt? Why wear white when you damn well know how much you sweat? All men know how much they sweat. I’d also like to inquire as to how both Mr. Miller’s hair and pants appear completely dry, while his shirt has disappeared into his skin. At least his tie is askew, so we know he’s uncomfortable with the situation.

This is an instance where one man and one shirt simply were not enough. The Arizona Wildcats entered Thursday’s first round tournament game as the favorite, a six seed facing off against eleven seed Wichita State. You see, what happened here was that Arizona decided not to show up for the first half, going down by twelve points to enter intermission. Yet the team rallied, outscoring its opponent in the second half of action by two. Some quick math leaves the Wildcats ten points behind, with a first round exit. Yet NONE of that explains what happened to our Sweaty Coach!

Our photo was taken with over ten minutes remaining in the first half, with a mere twenty points recorded by both teams in a game that would ultimately tally up 120 points on the scoreboard. Miller got very sweaty very, very quickly. He chose not to change his shirt, because it was obvious his condition was not going away. Despite his enthusiasm for his team and the action on the floor, this is not something to be admired.

Preparation is the key to success in life and in basketball. Our Sweaty Coach was not prepared for his own bodily actions and his team was equally unprepared to face off in the tournament. Let this be a lesson to sweaty coaches everywhere, contain your perspiration or prepare to be humiliated over and over and over again.