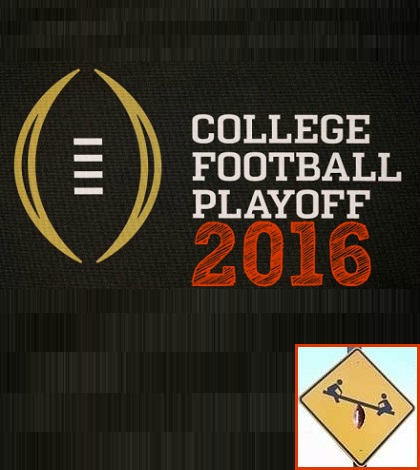 Of all the great teams in college football, only four will make the playoff. Will the SEC continue to dominate, or can another conference rise up? 2016 College Football Playoff predictions spurn debate.

In the first ever year of the College Football Playoff, our four finalists were Alabama, Oregon, Florida State and Ohio State. The fourth and final team to make it into the playoff was the eventual champion, but last season was eerie in how predictable it really was in a grand sense.

In the preseason poll for last season, those four teams were ranked 2, 3, 1 and 5 respectively in the country. The only outlier was the Oklahoma Sooners who were ranked fourth preseason and finished the year outside the top 25 entirely.

I am always skeptical of the validity of preseason polls since we have no evidence yet to back up the rankings. No professional sports use polls, so this is really the only example we have of a major sport relying so heavily on uninformed opinions. Nevertheless, last year the polls ended up being rather prophetic.

This year, the preseason top four is as follows: Ohio State, TCU, Alabama and Baylor.

If that is our formula, all four of the top schools can essentially be ruled out. Three of the four play in “easier” conferences, while the fourth, Alabama, resides in the SEC’s tougher half. Oregon and Georgia, a bit further down the first rankings, are exact teams that fit our description.

If you had to pick a final four now, would you stick with that mindset? I find myself veering off it slightly.

Even if we took the Ducks and Bulldogs, we still need two more schools to round out the finals anyway. I don’t like anyone from the ACC enough this year, nor do I think the Big 12 schools will do enough to make it in…just like what happened last year.

That leaves two spots for a Big 10 champion and an at-large, for lack of a better term. A second school from either the SEC or Pac-12 seems to be the likeliest scenario.

This is all beating around the bush because I don’t have an exact reasoning behind the final four I do like. Here is my group, whether it makes sense through all this or not: Ohio State, USC, Georgia, Auburn.

Auburn is my pick as the conference loser who makes it in, but I like USC over Oregon to take the Pac-12 this season, even though its fight through the South division will be tough.

No matter how much anyone bashes the college football rankings, be them preseason or otherwise, they always seem to be pretty damn good. In 2014 the early rankings were spot on, but in 2015 I think they offer more room for interpretation, meaning some lesser ranked teams will be playing in the playoffs.

Although it’s an “easier road” to the playoffs via a weak division of a power conference, that doesn’t make your team better than the competition. This is ultimately what draws the line in the sand for the 2016 College Football Playoff. Its going to be SEC and Pac-12 heavy down the stretch, with the obvious exception of Ohio State.

My 2016 college football Final Four includes Ohio State, Oregon, Alabama, and USC. The Buckeyes feel like the strongest team entering the year. Coming off a national championship, they return a dominating offensive attack to a schedule devoid of many tough matchups. Virginia Tech in week one could be tough, and ending the year against Michigan is a big game. But Ohio State still looks to crush its regular season schedule, with a real shot at running the table.

I’m also high on both USC and Oregon this season. Oregon fits into our “easiest road” scenario for making the playoff, but they are a solid team with a very winnable schedule as well. Their biggest game won’t come until they face off with USC near the very end of the season. This has the potential to be a battle of undefeated teams, as USC is going to bounce back with a vengeance, behind quarterback Cody Kessler. The Trojans have a tougher schedule coming out of the Pac-12 South, but it won’t stop them from reaching the playoff.

Alabama is my final team in the 2016 Playoff. They start the year ranked third in the polls, and will likely end the season in the exact same spot. I see at least one loss on their schedule, against either Georgia or Auburn, but that will be the lone blemish on a terrific season. I see a single undefeated team, and three more one loss clubs, making the 2016 playoff. Two losses will be the nail in the coffin for our remaining contenders.